Is Facebook still the king of social media? In terms of sheer traffic Facebook may still have a sizable lead, but businesses are finding it may not be the best platform for their marketing. In fact, a report by L2 and Olapic shows brands are starting to invest more effort elsewhere.

Brands are now posting more content to Instagram than they are on Facebook, most likely due to the continuously declining organic reach for brands on the big F.

The signs of Facebook’s downfall as the primary place for social media marketing have been around for quite some time. As organic reach started to fall, brands began migrating to other social networks and cutting back on their organic efforts on the site in favor of paid advertising.

Facebook’s paid advertising platform allows brands to get even more reach than they had developed organically, but at the sake of organic reach. In comparison, Instagram is (for now) almost entirely based on organic content.

Instagram may not stay the most popular platform for branded content for long, either. The Facebook-owned social image sharing platform has already implemented some advertising options and have publicly announced plans to expand paid advertising on the site. Nonetheless, most brand activity on the site is currently organic. 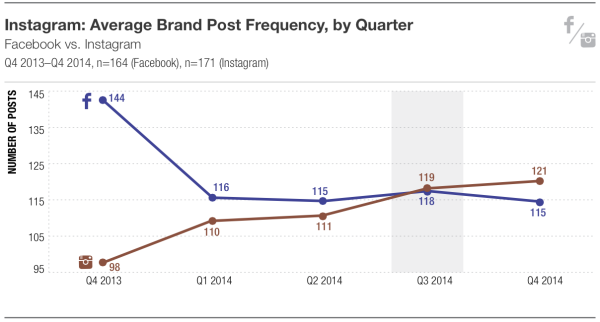 The L2 report found the 250 participating brands posted an average of 9.3 times per week on Instagram compared to 8.8 times on Facebook in Q4 of last year. Compared to the same time period in 2013, Facebook was down from 11.1 a week, while Instagram boosted itself by nearly two full posts a week.

Other notable findings from the report included:

How is the SEO World Managing Post-Penguin 2.0?

Bing Tells You Why They Are Better At Image Search

Pinterest Now Alerts You When Pinned Items Go On Sale