So Paul Christoforo and Ocean Marketing have gone viral.  But even though they say bad marketing is good marketing, I think this particular instance is an example of bad marketing being bad marketing.

END_OF_DOCUMENT_TOKEN_TO_BE_REPLACED

As I mentioned before, Google Gaydar was a “feature” that came from the search engine that wasn’t announced, but did catch the attention of many when it was noticed.  This feature is part of a new adjustment to Google’s services, called by most: Google Best Guess.

END_OF_DOCUMENT_TOKEN_TO_BE_REPLACED

Yes, that title is correct.  Google has not made any announcement that I’ve heard about regarding this, but you can actually type a query into the search engine to find out what Google’s “gaydar” has determined.

Here’s my test of the latest Google Gaydar functionality: 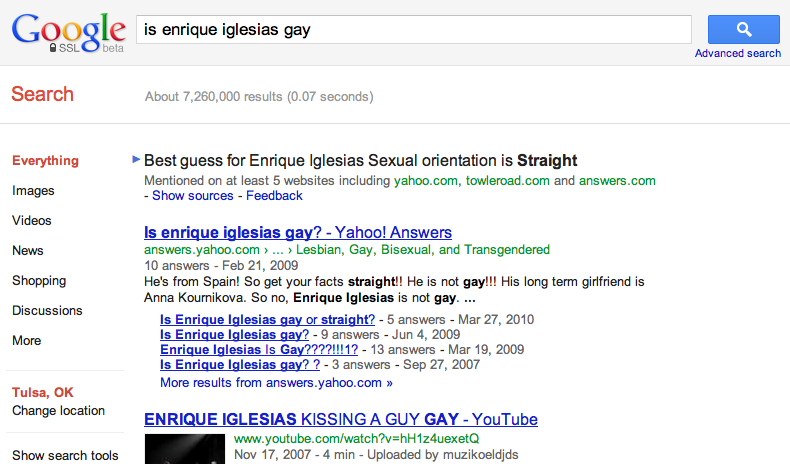 So there you have it.  Perhaps it’s accurate, perhaps it’s something one of the developers put in as an easter egg that got discovered, perhaps it’ll be gone tomorrow.  But for right now it’s yet another Google tool that can be used freely from your computer.

It’s probably still in beta, though.

So today Google put up a Les Paul theme for their new logo.  And it’s interactive!  I’m a guitarist, so I played with it a bit and found out this about it.  All the “strings” are corded so that the notes go up as you play downwards.  The reverse of what a normal guitar tablature does.  The actual notes are as follows, going down: C, E on the top of the “G” of “Google”.  Then in the middle section, on the left, G, B, G (an octave up), then another B an octave up on the bottom of the “G”.  And then on the right, A, D, F#, then another A an octave up.

The button underneath is to record what you might be able to figure out.  I noticed that there are some basic chords in place with the strings arranged as they are.  Not every note is in place for all these chords, but the rough structure is as follows: a C major (minus the 5th) using the top two strings of the “G” of “Google”, a G major (minus the 5th) for the middle three strings and bottom string of the “G”, and then a D major over A (also known as D/A) for the strings on the right.  It’s tricky to play them, but if you can work the mouse well you can play the chords nicely.  Here’s a basic composition I put together.

I’m quite pleased with seeing Google put some music on the home page.  Hope you have fun with it – if you make any particularly cool compositions, put the link to them in the comments!

In the effort to get links and spread word of your business online, many people can get a bit overzealous.  Ryan Sammy put together an excellent list detailing the 7 deadly sins of content promotion.  I’ve summarized them here, with my own input on it.

END_OF_DOCUMENT_TOKEN_TO_BE_REPLACED

So I was up late and had YouTube going.  Noticed a funky little button to the bottom right.  “1911?  What’s that mean?”  So I clicked it, of course.  And it’s awesome.  I highly recommend you try it out.  Especially their review on the best viral pictures from 100 years ago.

Just a quick post to give a notice of one of Google’s fun additions to their sites.  Aside from their open position for autocompleters, of course.

When working on a business, sometimes you get a bit sidetracked and don’t always keep up with some things.  In this case, it’s been the blog.  However, the site has a new look to it, and with it, some changes are to be made.