Twitter has released a new type of video ad called the Video Website Card, which is aimed at helping advertisers drive traffic to where they need it most. 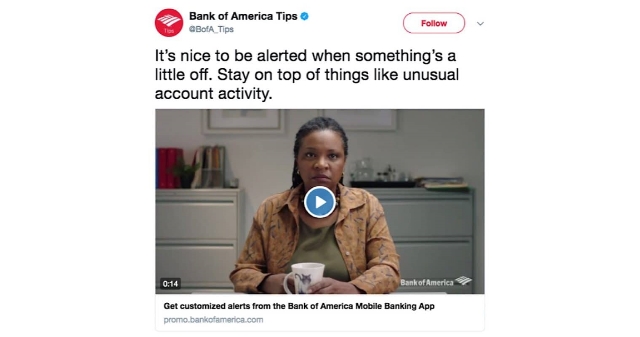 The new ad unit uses a multi-faceted approach to help streamline the process of directing users to your site, mobile app, or any other place you want.

It starts with an auto-playing video ad which Twitter says drove twice the normal engagement of standard mobile video ads in a beta test. 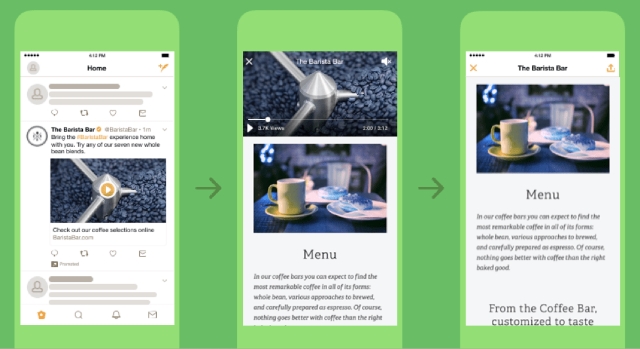 After the video is over, advertisers can include a clear call-to-action to drive viewers to your preferred location. However, if a user taps the ad while the video is still playing, it will continue to play while the website loads. Twitter claims this increases user retention by over 60% because it keeps users engaged while waiting for your site to load.

As you would expect, the ad unit also includes a customizable headline and a destination URL. You can also optimize the Video Website Card for your specific goals, such as video views, website clicks, or awareness.

The ad unit is already available to all Twitter users around the world, so you can start testing the new Video Website Cards today.

Business owners can “view videos added by customers and upload videos about their business for customers to view,” said Google’s Allyson Wright.

Videos can be up to 30 seconds in length and may take up to 24 hours to become visible on the business listing in Google Maps and local search results.

Because others like Google’s “Local Guides” can also upload videos to business listings, GMB will also soon give businesses the ability to mark offensive or inappropriate videos on their listings.

To get started adding videos to your own listings, open your Google My Business Dashboard and click “photos,” followed by the “video” tab at the top of the page. From there, select the option to “Post Videos.”

Just drag and drop your video to the box. 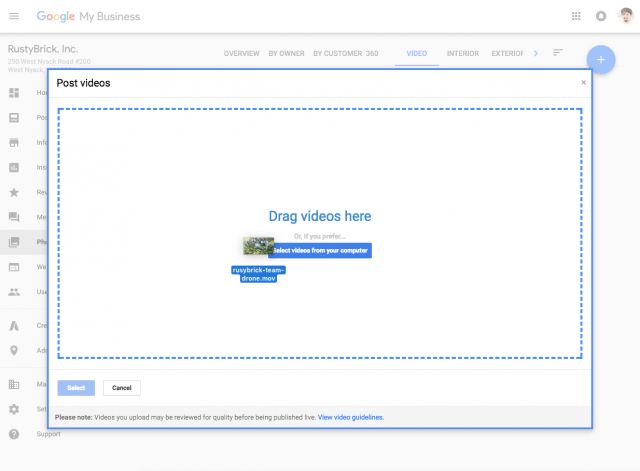 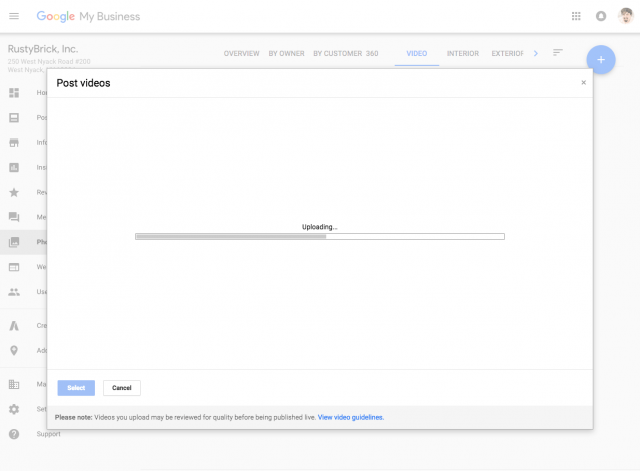 And wait for it to appear. Within about a day, the video should become visible for you and anyone who sees your listing.

Wright also provided these notes about the new feature:

In an attempt to breathe some life into their version of ‘Stories’, Facebook is expanding the feature to all pages – rather than just individual users.

This means brands can now start sharing Stories too all their friends and followers, though it’s unclear whether businesses will take Facebook up on the offer. 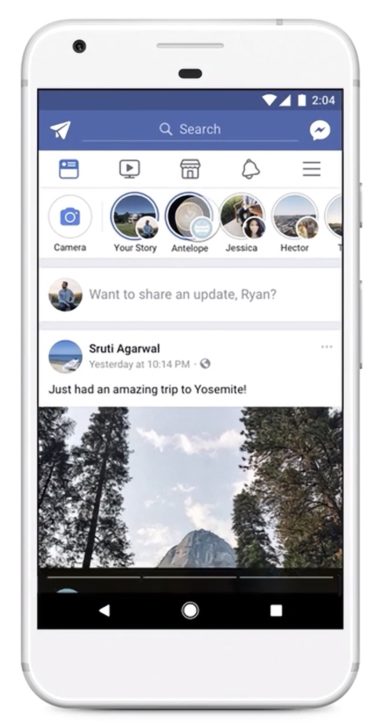 Since launching the Snapchat-like feature on Facebook earlier this year, Stories have largely been ignored by most users. Compared to Instagram or Snapchat, Facebook has struggled to find the right place or utility for their own version of the feature and many have forgotten the feature exists at all.

Rather than admitting their failure, the massive social platform is doubling down in hopes that they can encourage more users to share their own stories by letting brands take the lead. Presumably, the hope is that users will follow more influential pages’ leads and boost the number of Stories being shared.

According to Facebook, the expansion has actually been in high-demand recently. Product manager Amy Sun says users have been clamoring for more ways to share and engage in the feature.

”We’ve been listening to our community and working to make it fast, fun and easy for people and Pages to create Stories on Facebook. Over the coming month, Pages will be able to create Stories to share with the people who follow them.”

It is entirely possible that this move will allow Facebook Stories to finally find their audience and take off as a legitimate way to engage with your friends and followers. However, it feels likely that Stories are just not a natural fit for Facebook and may never see similar levels of popularity as on Snapchat, where the idea originated. 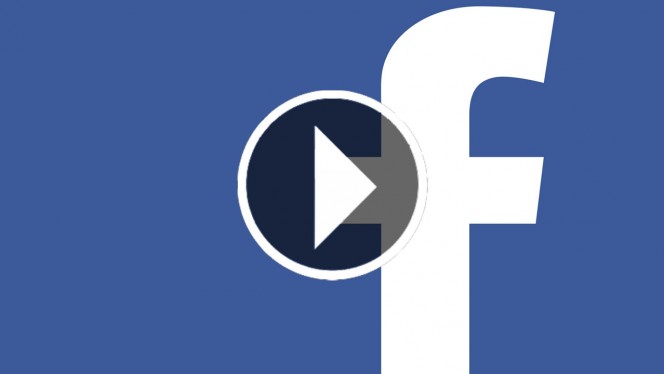 It may not come as a surprise that Facebook favors native videos, but a new report shows just how much of a boost videos can get by being uploaded straight to the social media platform.

The report comes from a study originally published back in March, but which has been recently updated with data collected between January and July of this year.

Including the new data, the study analyzed 187,000 Facebook pages and 7.5 million posts. From all this data, Quintly says it deduced that approximately 92% of all videos on Facebook are uploaded natively. 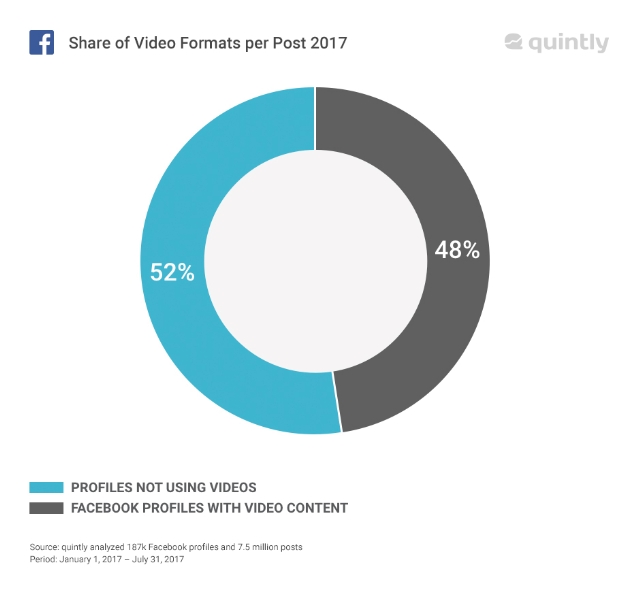 The study also shows how video has grown on Facebook recently. From January to July, almost half (48%) of all pages analyzed uploaded a video to their timeline. Of those, 92% posted at least one Facebook native video or Facebook Live video.

In comparison, only 26% of pages analyzed posted YouTube videos and 7% shared videos from Vimeo or other sources.

Facebook video’s biggest competition still comes from YouTube, but Facebook’s own clips still trounce all others in every metric.

It is highly likely that part of Facebook’s domination here is that it owns the platform, and thus, makes the rules. Facebook is almost certainly showing their own videos more prominently, which would lead to more engagement.

However, that is not the whole explanation. Native videos on Facebook’s platform also enjoy several arguably natural benefits that make them more likely to be viewed and engaged with. They can be played seamlessly from your timeline and users can react or comment as they’re watching.

In comparison, videos from other platforms have to be viewed off-site or in a separate pop-up player, and then navigate back to their timeline to like, share, or comment. At that point, they might decide to move on and keep scrolling through their feed.

Whatever the reason for native video’s domination on Facebook may be, it is clear that posting your clips directly to Facebook is the most effective way to get seen and build your brand on social media.

Google has been teasing a massive revamp to the AdWords experience for months, and now it’s finally here.

The company says the redesign and new features provide a faster, more intuitive experience with a better focus on meeting advertisers’ goals.

The biggest changes to the ad platform are mostly focused on design and speed.  The ad interface is less cluttered and easy to navigate, letting you put more focus on your advertising efforts without distraction.

The streamlined style also allows pages to load up to 20% faster according to Google.

Visualizations have also been improved to make it easier for you to see how your ads are performing and how people are engaging with your business.

The new experience also brings a few new features like bid adjustments and landing pages. These features have been available to those who got into the revised AdWords experience early, but this is the first chance for most advertisers to test them out for themselves.

Google has put together a number of new guides and videos to help everyone get accustomed to the new AdWords experience. You can get started by checking out the guided tour, how-to videos, or the best practices guide.

Everyone seems to be ripping off Snapchat’s style these days, whether it’s the spread of vanishing video or “Stories”. Still, it doesn’t seem to be impacting the platform’s popularity with their biggest demographic.

Teens still prefer Snapchat over any other platform – and it’s not even close.

The investment firm Piper Jaffray’s latest annual “Taking Stock With Teens” report surveyed over 6,100 people across 44 states. It specifically asked teens about their social media usage over the past month.

According to their results published on AdWeek, almost half (47%) of all teens said Snapchat is their favorite app. That’s an increase from 35% last year. The closest runner-up was Instagram, which was preferred by 24% of teens. Despite being the biggest social network, Facebook trailed with 9% of the vote. Lastly, Twitter and Pinterest picked up 7% and 1% respectively.

The report also includes a number of other interesting findings about teens’ media and shopping habits, including:

AdWords has made a pretty massive change to the way daily ad budgets can be spent, and it could wreak havoc on advertisers’ ability to manage their budgets.

Google has always allowed campaigns to spend up to 20% over their daily budget. The idea is to provide flexibility so that you can take advantage of days where your ad performs best and minimalize waste when your ad isn’t doing well.

By the end of the month, this variance evens out so that you meet your monthly budget.

Now, AdWords has massively raised the daily overspend cap. Campaigns can now spend up to double their average daily budget.

To help you hit your advertising goals, your campaigns can now spend up to twice your average daily budget. https://t.co/TUO08wXnl3

The change doesn’t directly affect your monthly budget, and Google says you will still never be charged more than your monthly budget. In the long run, it may prove to actually be a great way to ensure advertisers reach their goals more consistently. However, it also raises a number of big questions about how ad budgets are managed.

The biggest problem how the increase could affect ad visibility. If an add sees a few days that draw in significant budget overspend early in the month, they could realistically run through their ad budget early in the month. That means ads could disappear unless you increase your budget.

The response has been overwhelmingly negative, with most of the criticism focusing on the fast roll-out and lack of opt-out. The change was applied overnight to all AdWords accounts, and advertisers cannot revert back to the earlier limit.

Like most changes on Google, we will just have to wait for time to tell whether this is a big mistake or an uncomfortable improvement.

Instagram is quickly growing from just a platform for users to share pictures and videos towards a fully-fledged combination of social media and shopping. With the help of Shopify, Instagram is rolling out a new feature allowing “thousands” of merchants to seamlessly sell their products through Instagram just in time for the holiday shopping season.

The feature allows selected merchants to tag items in their Instagram posts to mark that they are available for purchase. When viewers see the post, they can easily click the tags to directly purchase the items without ever having to leave Instagram.

The feature has been in limited testing for almost a year, but it has been restricted to just a small number of high-profile brands like Warby Parker and Kate Spade. Since then, they’ve been gradually opening the feature to a few other merchants through Shopify.

The early response to this testing has been enthusiastic, so Shopify has now decided to expand the feature to a larger testing group including “many thousands” of merchants. They say they expect to roll it out even more widely in the near future, but they want to test and refine the system before a complete launch.