Anecdotal evidence has suggested Facebook has been losing popularity with teens for years. Now, research from Pew Research Center confirms it.

Based on a survey of American teenagers between 13 and 17, just 32% of teens are using Facebook.  For comparison, a similar survey in 2015 showed that 71% of teens were active on Facebook at the time. Meanwhile, the majority of teens are moving to newer platforms such as TikTok and Snapchat.

However, the most universally popular social network among teens remains YouTube, by a wide margin. Based on the survey results, more than 95% of American teens use the video-sharing platform regularly,

Here’s the full list of most popular social networks among US teens:

Notably, the report indicates there are some slight differences in social media between genders:

“Teen girls are more likely than teen boys to say they ever use TikTok, Instagram and Snapchat, while boys are more likely to use Twitch and Reddit. Boys also report using YouTube at higher rates than girls, although the vast majority of teens use this platform regardless of gender.”

When the survey asked teens about how regularly they use the top four platforms, here’s what they had to say:

Additionally, the report revealed that many teens feel attached to social media with over half (54%) saying it would be difficult to give up social media. At the same time, just 36% of teens are concerned they spend too much time on social media.

For more findings, read the full report from the Pew Research Center here. 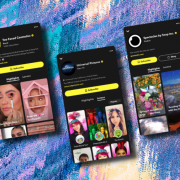