Promoting a tweet on Twitter just got a lot easier. While users have been able to promote tweets in the past, it required going through the company’s self-service platform. Now users can use the “quick promote” tool to quickly and easily promote a tweet.

Twitter designed quick promote expressly with small and medium businesses in mind. All you have to do to increase your tweet’s visibility is go to your tweet activity dashboard at analytics.twitter.com. Then, you simply have to select the tweet you want to promote and click the option to promote the tweet in the left sidebar. 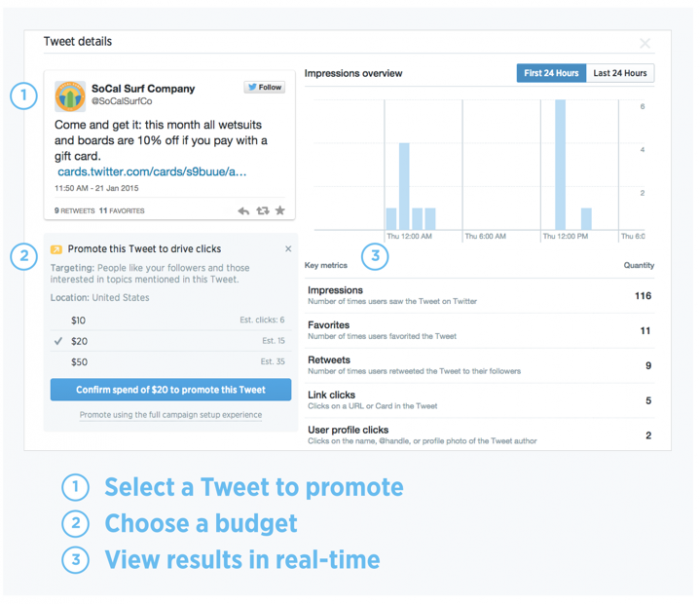 For now, the service is relatively limited compared to Facebook’s extensive ad platform. Currently, Twitter only allows you to target quick promoted tweets to users similar to your followers. Although nothing is confirmed, it seems likely the company will expand the options in the near future.

The more useful features for small businesses hoping to increase their Twitter visibility is the ability to set small budgets and receive an estimate of how many people you are likely to reach.

After you’ve set the budget and promoted your tweet, you can watch its performance in real time using the analytics dashboard.

The service isn’t revolutionary, but it was in dire need for one of the most popular social platforms around. Now, small and medium businesses can benefit from Twitter ads in the same way big brands have been for over a year.

Google Shows How They Fought ‘Bad Ads’ In 2014 What Do Businesses Need To Know About Online Reviews? [Infographic]
Scroll to top