We are just a day away from the start of World Cup 2014, and this year’s competition will be the most socially connected yet. Social media use is at an all-time high, and Twitter and Facebook are locked in a battle for the place as the dominant platform users turn to for keeping up to date with scores, game times, and fan response.

Though soccer is often treated like a novelty in the US, the sport actually has a strong and passionate audience across the country – not to mention the unbelievably large fan base around the world. FIFA claims that around 3.2 million people watched at least one game of the last World Cup in 2010, and this year seems likely to get even more viewers.

As Twitter and Facebook made clear with announcements yesterday, both platforms are hoping to get a piece of the action by rolling out campaigns aimed at promoting soccer and encouraging fans to turn to their specific platforms. 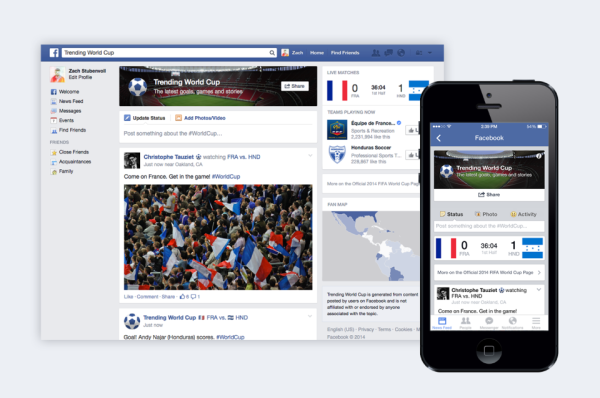 Facebook’s News Feed algorithm isn’t exactly well-suited for keeping up with real-time conversation like Twitter is, but it is offering a Trending World Cup page designed to help fans follow the latest scores, match highlights, and conversation. The page will even allow users to click through a global map which displays the Facebook popularity of top World Cup players.

Several people, including Marketing Land, have already used the global map to discover some fairly interesting statistics, such as England’s Wayne Rooney being strangely popular in Namibia.

As with all of Facebook’s trending pages, the World Cup page will also show the latest posts from friends, players, teams, and the media making sure you never miss a spectacular goal or scandalous foul.

Facebook users will be able to filter conversations based on the specific match they are watching as well, once the games have started.

Twitter users can already access a dedicated World Cup landing page via the hashtags #WorldCup and #WorldCup2014, which offers a scoreboard and updates with conversation about the event and games. Similar to Facebook, Twitter will also allow users to organize what content they are seeing by selecting “match timelines” that only show tweets about specific games.

This is fairly standard for users, but Twitter users from the last World Cup may be excited to see that “hashflags” are returning for the latest competition. Introduced for the 2010 World Cup, the feature displays flag icons of people who include appropriate three-letter hashtags in their tweets. Before the games kick off on Thursday, Twitter will also unveil “The World Cup of Tweets” bracket.

The social platform is also acting to retain new users who choose Twitter for their World Cup 2014 social needs by adding soccer suggestions to the sign-up process throughout the games.

“After you sign up and choose your username, you can select the team you’re supporting,” Twitter’s Xiaolei Li wrote in a blog post. “Then you can choose from a number of profile and header photos that represent your country. (Of course, you can upload your own photos too.)”

Why Should Startups Set Up Their SEO Early?

Get the Most Out of Hashtags

Why You Should Keep Your Preferences Out Of Logo Design