A little over a year ago, Google brought apps into advertising through the use of app install and app re-engagement ads, which made their way to Google’s mobile AdMob Network this June. Today, these ads also became available on Google Search and YouTube globally.

If you haven’t gotten familiar with app install and app re-engagement ads, Ginny Marvin gives a great explanation in her article for Marketing Land.

My SEM writing tends to focus on optimization and organic outreach, but with organic reach shrinking across the web, paid search advertising is becoming an increasingly important part to growing your brand and attracting new customers. Paid search has changed just as much as SEO over the past few months of 2014, and Ginny Marvin from Search Engine Land recently compiled the 10 most important developments. Her list is a handy way to catch up on all the Bing Ads and Google AdWords advancements you need to know about.

Google announced the results of an interesting study this week that proclaims “Search Ads Lift Brand Awareness“. By the title of the announcement alone, it sounds like a promising reason to invest more in AdWords campaigns for your business, too bad the information is slightly misleading.

Don’t get me wrong, pay-per-click search ads can be absolutely beneficial for a business. But, it is troubling when a group misrepresents their findings to a more positive spin when it clearly benefits their own business.

Ginny Marvin was one of the first to point out the misleading nature of the Google report, and sums up the issue quite well by offering the alternate title “The Top Search Ad Lifts Brand Awareness”. 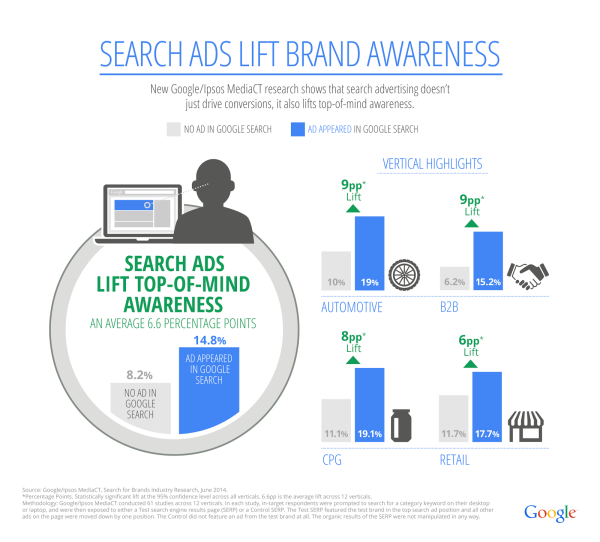 The Google meta-study reviewed several studies conducted by Google and Ipsos MediaCT across a set of verticles including CPG and automotive. A total of 800 consumers were asked to search for a category specific keyword. Across those searches, the results showed that the test brands saw increases in awareness across all verticles.

When respondents were asked what brand first came to mind when thinking about a specific category keyword, an average of 14.8% in the Test group named the test brand, while just 8.2% of the Control group named the same brand. That’s a 6.6 percentage point increase or an average 80% lift in top-of-mind awareness.

That is all well and good, but the problem is Google only tested the brand impact for brand’s appearing in the top spot. None of the other ad positions were evaluated at all.

The Test SERP featured the test brand in the top search ad position, with all other ads on the page moved down by one position. The Control did not feature an ad from the test brand at all. The organic results of the SERP were not manipulated in any way.

Marvin is much more precise with her deconstruction of the flaw in Google’s study, but simply put: all ad spots are not made equal. In fact, like ranking positions, ad spots are highly inequal. The ads in the second and third positions are likely to experience in awareness, but the nature of the study makes that impossible to verify. Almost certainly, any awareness lift they see is modest compared to that found in the first position.

In the end, Google’s recommendations based on their findings are probably still solid and no online marketer will argue about the value of branded paid advertising. Still, Google should be more careful with their words next time. Intentional or not, misrepresenting findings never looks good.

You may remember the uproar from last October, when Google began experimenting with huge banner ads that ran across the top of branded search results. Many hailed them as the first sign of a completely branded search engine, while others weren’t as bothered by the large graphics appearing strictly on branded searches.

Either way, you shouldn’t expect to see the ads any longer. During a SMX West keynote discussion with Danny Sullivan, Google’s Armit Singhal declared the test to be over while saying that the test had failed.

Ginny Marvin suggests the test ads weren’t getting high enough click-through rates (CTR) to justify expanding or keeping around, but even Marvin admits CTR would be an odd metric to measure the success of the ads considering they acted more as a graphic introduction to brands you were searching for and didn’t include call-to-actions.

The test was very small in comparison to most Google tests, with only about 30 advertisers participating. Their banners were only shown on about 5 percent of search queries. Maybe Singhal or someone else from Google will explain how the tests were failures, but I wouldn’t bet on it. Most likely, the tests will just be forgotten like many other failed Google experiments.

However, if you missed the chance to catch some of these ads when they were appearing, or you are simply nostalgic for some nice branded banners, Marketing Land put together a slide show with many of the banners when they were still active, which you can view below. 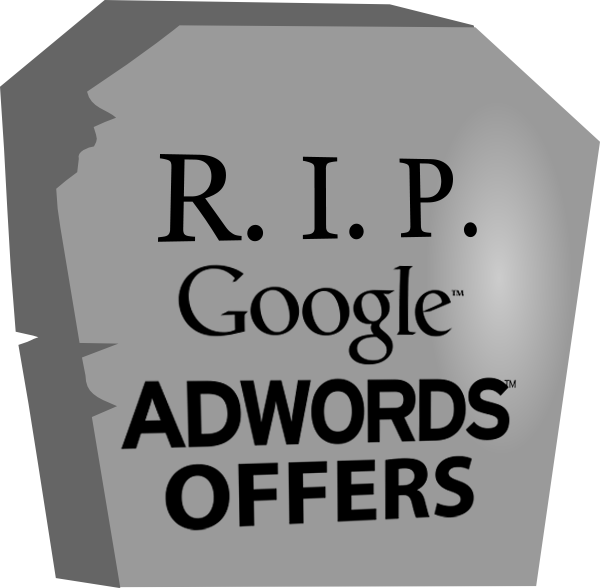 The alert was posted on the support page for Offer Extensions. It reads:

We recommend reviewing your campaigns to ensure your messaging continues to fit your goals. To retain offer extensions reporting for your records, remember to download campaign reports before November 1. Consider using sitelinks or Google offers to promote your deals and offers in the future.

On the other hand, on October 24, Google announced an updated self-service tool that allowed US businesses to create Google Offers. This way, consumers can use their smartphones to redeem and save coupons and promotions. These offers are distributed through Google Maps, Google+, Google Wallet, and the Google Offers app and website. It appears Google is putting their investments into turning Google Offers into a success, rather than trying to force AdWords Offer Extensions to catch on.

AdWords Editor is one of the best tools available for editing and building out campaigns and ad groups, but it has its limits. For example, it would be convenient to be able to break up an ad group, clone a campaign, or copy keywords right into the Web UI. Thankfully, now you can, as Ginny Marvin reports. This week, Google added copy and paste functionality for the Web UI, making AdWords Editor even better than before.

Users are now able to copy keywords, ads, ad groups, or entire campaigns directly into the Web UI with the simple keyword shortcuts you are already used to. Simply press Ctrl-C/Cmnd-C and Ctrl-V/Cmnd-V. Though if you want, you can also use the Edit drop down menu.

Martin suggests the final version of the update might not be exactly as Google’s screenshot shows. Apparently you may see “Copy to” instead of “Copy” in the drop down, and you might not see the option to “copy keywords as paused”. Other than that, the tool is expected to roll out as planned.

You will be prompted when copying keywords to select both the campaign and ad group where you would like them to be copied. 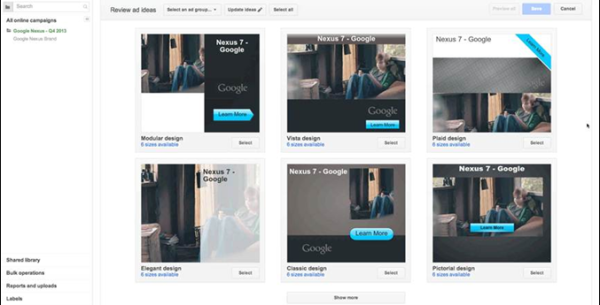 Google made some changes to how you can design display ads to help ease the challenges advertisers and SEM agencies have been complaining about for what seems like forever. Today they rolled-out Ready Image Ads within AdWords, which aims to make it easier to create ads for multiple sizes that look good across all devices. The tool is currently Google’s best attempt to solve this issue and they hope to get more AdWords advertisers to run display campaigns, according to Ginny Marvin.

The tool works by simply entering a URL from your website. From there, the Ready Image Ads tool automatically pulls images from your site to create various ads in various IAB standard sizes. These ads are also HTML5, making them compatible for viewing on mobile and desktop devices alike.

Ready Ads can also be used to create dynamic ads, engagement ads (including hover-to-play and lightbox ads), video ads, and general purpose ads from a variety of templates. View Google’s introduction video for Ready Ads below:

Facebook reportedly began gauging the interest of advertisers in video ad units about 6-months ago and now, as Ginny Marvin reports for Marketing Land, they appear ready to roll out video ads to newsfeeds by July.

The video ads are expected to be available for all platforms, desktop, tablet and smartphones, and at a lower CPM for broadcast television ads. However, detractors have already started wondering aloud how users will react to more ads in their newsfeed. Especially a concern about how autoplay videos will effect the site’s load times, especially for smartphone users.

Advertisers will certainly be clamoring for the ad space in the early going, but we’ll wait and see if it becomes a proven commodity.