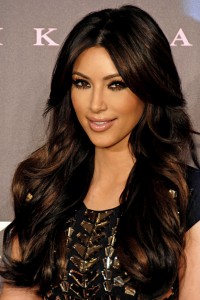 Love her or hate her, chances are if you were searching for a celebrity this year using Bing, you were probably looking Kim Kardashian. Thanks to her highly publicized marriage to Kanye West and her “break the internet” magazine cover, Kardashian was the top searched for celebrity on Bing in 2014, topping a list of mostly female celebrities, according to Bing’s latest list of search trends.

Bing Trends compiles the most popular searches across 15 different categories every year, including everything from top news stories, athletes, and vacation destination searches. There is even a list of the top ALS Ice Bucket Challenge videos shared online this year.

Keeping in line with past lists and similar findings from Google, the list of most searched for celebrities is absolutely dominated by women, with females taking eight of the 10 spots. Notably, the Kardashian family occupies more than one spot on the list as younger sister Kendall Jenner also makes an appearance on the list.

The lists also covers the biggest events and news stories of the year. Capturing the most attention of the entire year was the World Cup, however numerous more serious world news stories such as the rise of ISIS and the protests in Ferguson also claim spots on the list.

The top searched Musicians is also notably female-heavy, with Justin Bieber being the only male to hold a spot on the list. Other controversial figures also sit near the top, such as Miley Cyrus and Katy Perry. Of course, at the top of the list sits Beyoncé for another year.

You can see the other findings for categories including “political movers & shakers” “most-searched athletes” and “celebrity births” on Bing Trends.

How To Boost Your SEO Productivity
Facebook Sent 10% More Traffic To Publishers This Year
8 Things Anyone Can Do To Improve Your Paid Search Marketing Efforts
New Report On Mobile Shopping Holds Great Insights for Advertisers
Who is Using Flat Design?
8 Ways to Make Your Site More Readable
The Best Practices For Responsive Design [Infographic]
Oversized Layouts: Why Designers Are Going Big
0 replies