For years, Google has had a strong hold on the search industry, maintaining over a 75% market share for the desktop search market. If recent months are any indication however, that grip appears to be loosening.

According to the latest data from StatCounter, Google’s desktop search market share dipped below 75% for the first time since July 2008, continuing a downward trend that started in November. 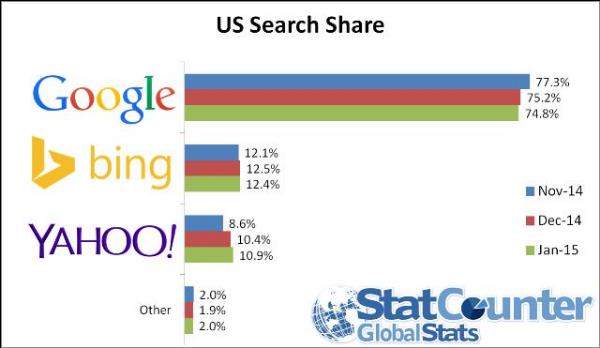 In November, Mozilla replaced Google with Yahoo as the default search engine on its Firefox web browser. Initially Google didn’t seem to be concerned, but a three month drop in search share seems to be finally getting their attention.

In mid-January Firefox users who visited the Google homepage were greeted with a banner encouraging them to set the search engine as their default. At the same time, Google also began tweeting instructions for how to replace the search engine. 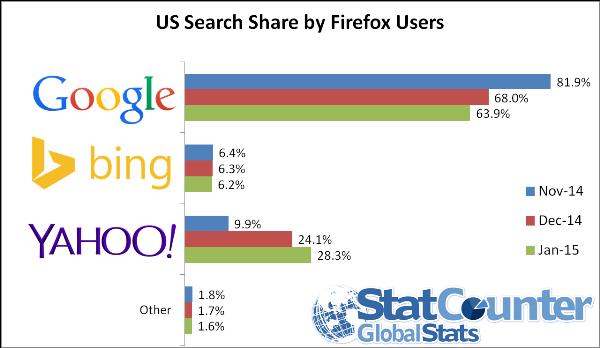 Since the five-year agreement was made between Yahoo and Mozilla, Yahoo has been consistently gaining ground, already replacing Bing as the second most popular desktop search engine. In total, Yahoo has nearly tripled its share of the desktop search market on Firefox, climbing to over 28% from less than 10% in November.

In the long run, it is still unclear whether Yahoo is going to be able to continue its ascent. While the changes are substantial, Firefox is also the least popular major desktop browser available. The change is search share is also limited to desktop, suggesting users aren’t so much choosing a new search engine but accepting what they are being given.

Despite these challenges, Aodhan Cullen, CEO of StatCounter, says Yahoo is already beating the odds:

“Some analysts expected Yahoo to fall in January as a result of Firefox users switching back to Google. In fact Yahoo has increased US search share by half a percentage point. It will be fascinating to see if these gains continue.”

It will be interesting to see if the trend continues and how Google might try to persuade more users to actively choose their search engine over the default.

How Do You Design A Truly Great Logo?
Case Studies, Social Link Bait and How to Make Viral Content
What Is The Key To Successful SEO? Social Media Integration
SEO Budgets Rising, Google Offers Warnings
The Pros and Cons of HTML5 [Infographic]
Google Instant and SEO - How Is SEO Affected by Google Instant?
The Biggest Shifts In SEO You Need To Know For 2015
More Ad Conversions are Happening on Mobile According to New Report
0 replies