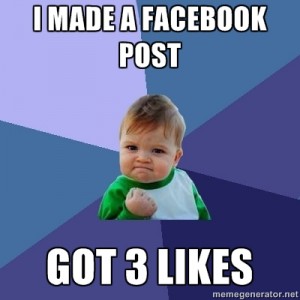 When the news broke of Facebook’s updates to their News Feed, advertisers everywhere scrambled to analyze the changes. Well, it appears we got it a bit wrong. One of the most reported elements of the updates aimed at “rewarding high-quality content” focused on the supposed removal of memes from user feeds, but it doesn’t appear that is actually the case.

Facebook really is revamping how they judge the quality of the content they deliver to users, but Facebook’s News Feed Manager Lars Backman gave some insight to the changes and denies there is an attack on memes during a recent interview with AllThingsD. Instead, Backman says it is a broader effort “to provide user value” in the News Feed.

The most interesting aspect of the interview actually says Facebook isn’t differentiating different forms of content for the most part. As Backman told Peter Kafka:

Are you paying attention to the source of the content? Or is it solely the type of content?

Right now, it’s mostly oriented around the source. As we refine our approaches, we’ll start distinguishing more and more between different types of content. But, for right now, when we think about how we identify “high quality,” it’s mostly at the source level.

However, while this sums up Facebook’s approach overall, Backman did say there is a specific type of content they are trying to do away with, but it isn’t memes. Instead, Facebook is attacking the types of content that blatantly begs for likes or shares, such as Like this if you are having a good day!

So, when the text or photo has a call to action, those posts naturally do much better. And in a traditional feed ranking, where we’re evaluating just on the number of likes, those things all did very well.

In a way, Facebook is simply leveling the playing field, because those types of content offered very little to users aside from surface level interaction, but they were consistently doing very well on likes and shares which were making them more visible. However, if your user base responds well to the average meme, you shouldn’t be afraid to use them as a part of your content.

The Best Metrics For Successful Marketing

The Digital Revolution in Advertising

The Only Local SEO Checklist You Will Need For 2014

Use Social Media for Awareness, Not Sales
0 replies