It was difficult to trust most tech news early this week, as April Fools’ Day pranks went live across the web, and all sorts of joke announcements were published. But, now the laughter has died down and the employees at Google and Bing have returned to work. We’ve gathered up their latest changes and (real) announcements, so you can be caught up going into the weekend.

Bing is ending the week by following Google’s most talked about recent change. Barry Schwartz and other prominent members of the SEO community began reporting that Bing is showing a new search results layout earlier today, but it currently appears to just be a test. 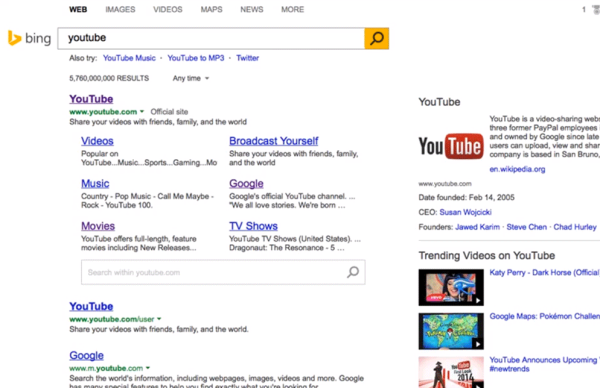 The new design changes the color of the logo from gray to the more familiar golden yellow, and the search button has been colored to match. Bing has also removed the gray background from the right side column. The interface is notably cleaned up, but overall the design won’t feel like as drastic of an update when it goes live as Google’s did.

Not long ago, Google was forced to pay a 145,000 EUR (approximately $189,000) to Germany for privacy violations associated with their Street View program, a Reuters story reports the search engine has now been issued a fine in Italy. The roughly $1.4 million (1 million EUR) fine also related to Street View, though this time it appears to deal with a failure to clearly mark cars used for Italian street photography in 2010.

When announcing the fine, Italian authorities acknowledged that Google has already remedied the problem and is no longer in violation.

Late last year, Google announced that they would begin allowing Android users to click on a Google result and open the page directly within an app, if it is already installed on the users smartphone. The first wave of apps being indexed by Google went live in December, and it would appear the test has been a success so far.

The search engine has now announced that they would be including 24 more apps in their indexing program. You can see which apps have been added in the image below.

Study Shows Sites Are Making The Switch To HTTPS