Paid ads on social media are becoming more and more prevalent, to the extent that Facebook finally admitted recently that businesses will be practically forced to pay for brand outreach on their platform. Which makes it so surprising that Google+ had, until recently, strayed away from paid advertising. But, the search engine giant may have had an ace up their sleeve this entire time as they have recently unveiled their form of promoted posts, called “+Post” and it is a doozy.

Most aspects of +Post are extactly what you have come to expect from paid advertising on social networks. A brand pays for priumium placement of a post, and more users are shown the ad. It is a simple model which has worked for numerous other social media platforms. What makes +Post different is where the ads will be shown.

The majority of social media networks are only able to show promoted posts on their social media platform. Facebook promoted posts show up in your Newsfeed, “Promoted Pins” will be appearing on Pinterest soon, and Instagram is rolling out their own curated form of promoted posting to ensure ads fit their market and the style of Instagram. But, Google+ is connected to something much larger: all of Google’s network and products. So, +Post will have a massively larger reach than other social networks’ forms of paid advertising.

+Post ads amplify your brand’s content by easily turning Google+ posts into display ads that run across the web. The live, social ad format allows you to go beyond clicks to live conversations with your audience. People can join a Hangout On Air, add a comment, follow your brand or give a +1, right from an ad. 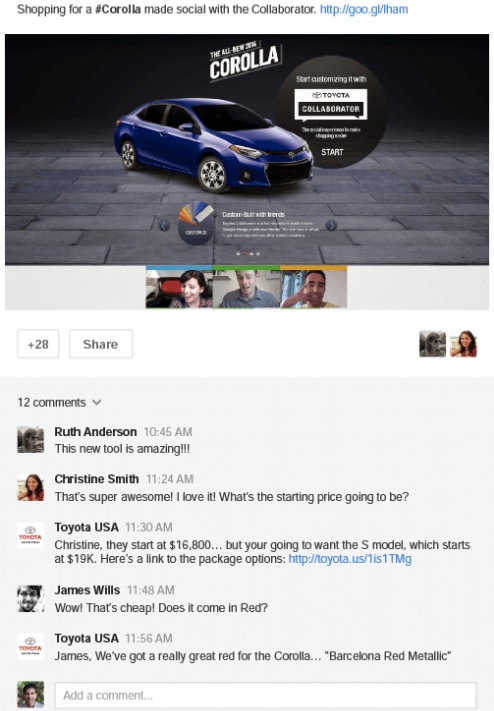 This is an incredibly smart move for the search engine, as Google+ is still struggling to find a larger active user base, and the advertising model may drive more users to their social platform. The +Post ads act like regular posts in Google+ no matter where they are displayed, which effectively bleeds Google+ into all other aspects of Google (more so than before).

In Google’s own words:

Ads become more relevant with social context. Comments, +1s, and shares from friends can move people to engage with your ad. Social actions on ads and Google+ add up together, showing the full picture of engagement with your content. +Post ads expand in a lightbox to bring full screen social creatives across the web.

Jessica Lee from Search Engine Watch reports a few brands have gotten to try out +Post before the announcement, specifically Toyota who was used for Google’s promo video:

Twitter is the Latest Site to Roll Out a Major Redesign

Google To End Support For Expanded Text Ads This Month

Design Rules From Magazines That Work In Any Medium