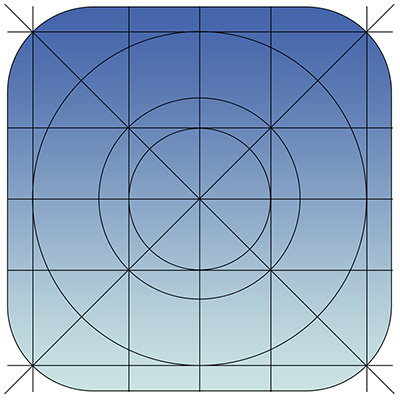 Apple’s keynote event earlier this month made news across the world, and few were impacted by the announcement of the new mobile operating system iOS7 more than designers and developers. While consumers will be receiving an updated user experience and new aesthetics on their phones and iPads in the next few months, designers are rushing to update apps and icons to keep their content up to date and optimized for the new operating system.

These designers won’t be forced to redesign from the ground up, however. There are already numerous resources available to help update to the new iOS. Designmodo is gradually collecting the best of these resources, and they recently highlighted two different icon grids for iOS, which are templates which you build icons on top of.

Beyond offering a few simple grids to assist the icon redesign process, there are also tons of examples of updated icons to help get designers steered in the right direction before the public has even gotten a hands-on turn at the operating system.

Blue: The Color of Business

The Guide To Great Typography

Just How Much of the Market Does Google Actually Control? Making Sense of Conflicting Reports

Using Data To Make Your Content Go From Competent To Outstanding

Google Revises Rankings Help Page To Demote Linkbuilding Why Use SEO When You Already Rule Your Niche?
Scroll to top