When Facebook announced their introduction of hashtags in June, it seemed to be a pretty big deal, especially within the social media marketing industry. Every online marketer immediately began investigating how to make the most out of the use of hashtags, and if they are even worth the effort. A few months later, it appears the hashtags aren’t faring well. 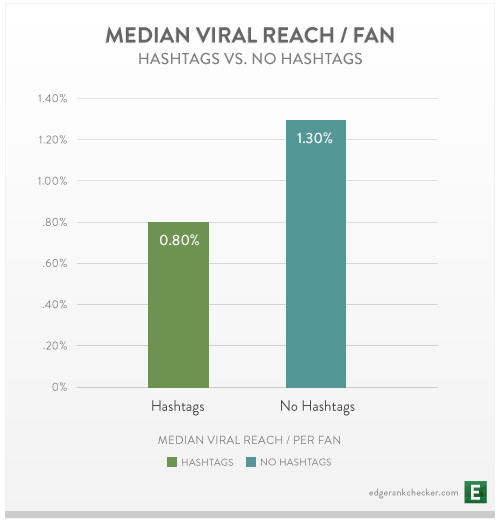 According to EdgeRank Checker’s data, viral reach and engagement were down on posts with hashtags compared to those without hashtags. They studied over 500 pages, and then compared their data to a sample of 50 Twitter accounts from Fortune 500 brands. They found that 70 percent of brands experienced an increase in retweets when using a hashtag, indicating higher engagement.

EdgeRank Checker did have an idea why Facebook users may not be responding to the hashtags:

We hypothesize that hashtagged posts don’t have the expected increase in Viral Reach due to how brands are using them. After examining how hashtags are being used, hashtags are often used in promotional material. For some brands, they’ve created campaigns around particular hashtags and use them in all posts associated with the campaign. By nature, campaigns are promotional, therefore more likely to drive less engagement, less clicks, and ultimately less Reach.

The Top Search Result Gets a Third of All The Traffic

The Downsides of Flat Design What is Google Doing About Low-Value Auto-Generated Content Sites?
Scroll to top