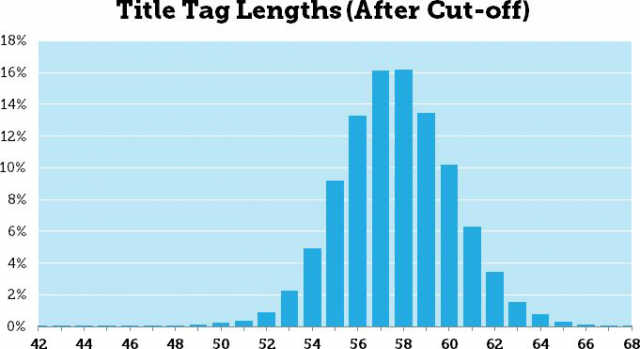 Chances are you are just beginning to get adjusted to Google’s widely-talked about search engine result pages (SERPs), but you may not have noticed the smaller details that have been tweaked to make the page look clean and coherent. For example, several eagle-eyed members of the SEO community have noticed that the redesign appears to have affected the visible title tag length for results.

The title tag, or the blue clickable link in the Google search results, doesn’t really have a defined number of characters allowed. It isn’t like Twitter, where you have a hard character limit. Instead, Google uses an algorithm to determine exactly how many characters are shown.

Obviously, Google hasn’t disclosed the details of their algorithm, but Pete Meyers from Moz says the title lengths range from 42 to 68 characters allowed, with most showing 57 to 58 characters.

Most importantly, this change has no direct impact on rankings. Google still reads your entire title and uses everything to helped determine rankings. However, this could make some titles less click friendly or attractive as they used to be.

You won’t be punished directly by Google for using the same strategy you previously have for titles tags, but you might refine your technique slightly to keep future titles as appealing to readers as possible.