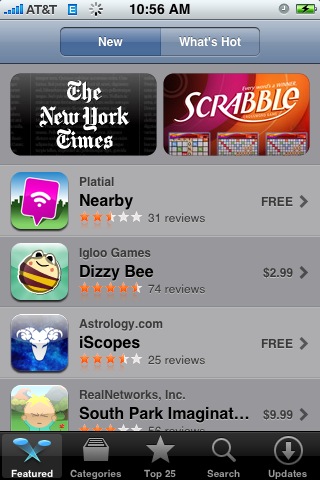 What responsive design doesn’t negate is the possible need for an app. There are over 600,000 apps in the Apple App Store alone, and more businesses are deciding to create an app for their products every day.

What many don’t realize is that apps require optimization just like websites. With the huge number of apps out there, you can’t simply get your app approved and expect to see a huge number of people downloading it.

Over the past few weeks, there has been a discussion about ASO (App Store Optimization) stemming from a Techcrunch article claiming ASO is the new SEO. We use apps more every day, relying on them for weather, news, entertainment, shopping, and organization, but I was initially skeptical as to whether ASO will ever achieve some sort of dominance.

Then I started considering my tablet usage throughout each day. I check a number of news sources including CNN and Vice, skim through the more lighthearted Buzzfeed and Cracked, and often browse Reddit. The only one of those activities I don’t do in an app is read news from Vice only because there isn’t one to use and I have checked more than once to see if an app existed (there is one for the iPhone however).

The thing is, I use these apps regularly in the morning and evenings when I’m away from work. For more casual viewers, these apps may not be used enough to justify the space they take up. Most of the apps I acquire either serve a distinct purpose, or allow me quicker access to content I would normally have to open in a web browser. The only type of apps I download without already being familiar with a company are tools.

None of this is to say apps do not have their purpose, or that optimization should be an important part of creating and managing an app, as well as reaching out to the public. However, there are many markets where the apps largely serve to make frequent visitors’ interaction with your content more efficient, and won’t reach as many uninitiated consumers as other markets would.

If you decide an app is an important product you release to the public however, ASO is practically required to keep your app from going nowhere. There are simple steps you can take such as making sure to clearly advertise the app on your website and sharing it on social media, but you can also do keyword research and find out what people are searching for.

While ASO certainly has its place, the debate over whether it will be the “new” SEO seems kind of silly to me. We may reach a point where it is important for every company to have an app, though I don’t think we are quite there. Even then, ASO will only be a small portion of what we do. SEO applies to every business online, and I don’t see it going away any time soon.

Cut Down On Coding Time With a Design Cheat Sheet

Typography Vs. Lettering: Know The Difference

Why Is No One Talking About Title Tags? jQuery Mobile 1.3 Released
Scroll to top