Reviews are one of the best tools local businesses have for establishing a reputation and trust within their community. The problem is it can be difficult to convince customers to leave their opinion on Google or Yelp, especially due to Yelp’s strict “no review solicitation policy.”

Yelp’s Luther Lowe gave a tip to help get past this hurdle and start generating reviews at the LSA SMX West Local Search Advantage Workshop. 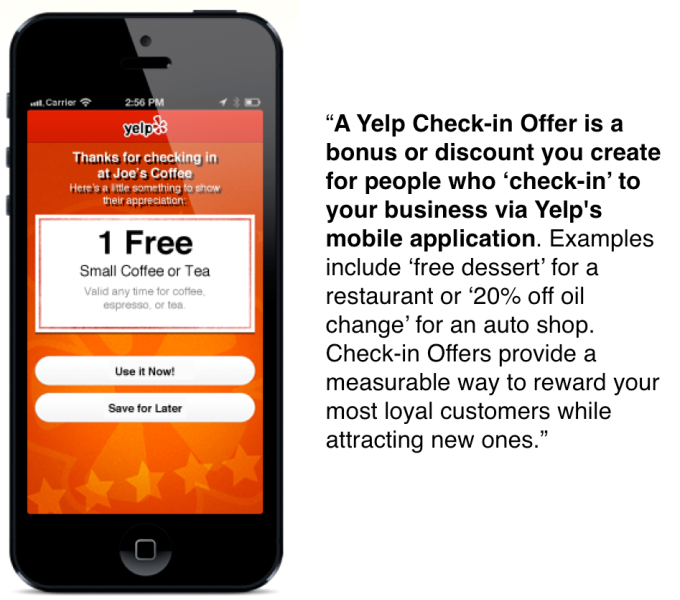 Yelp’s policy against review solicitation prevents businesses from asking for positive reviews, though it has not prevented some other creative attempts to gain a positive standing on the site. However, Yelp does allow incentivized check-ins. Obviously check-ins are not reviews, but when users check-in to receive an offer, they are automatically prompted to review that business the next time that return to the site or mobile app. 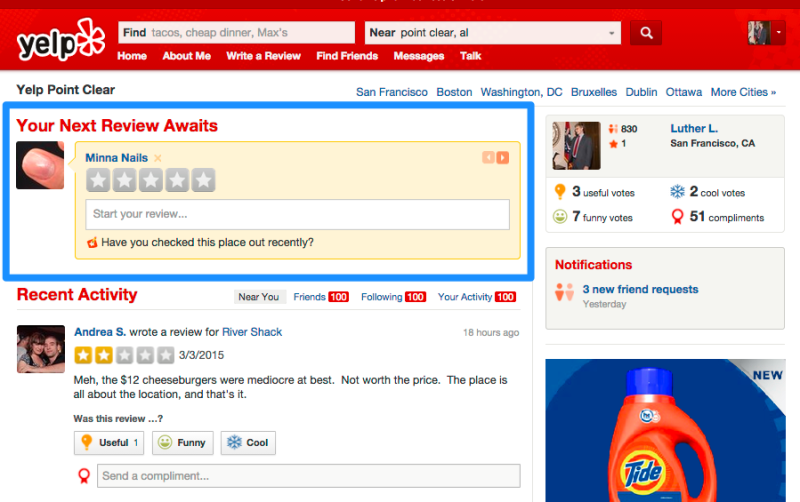 This system gives businesses a means of encouraging users to leave a review without placing their hands on the scale. The problem with allowing incentivized reviews is obviously that many people would be pushed to give dishonest reviews, but through a pre-review reward users are still free to speak their mind.

From a business matter, this also benefits Yelp because more check-ins equates to more value and usage, but it also gives a valuable place for businesses to lightly nudge customers to help spread the word. 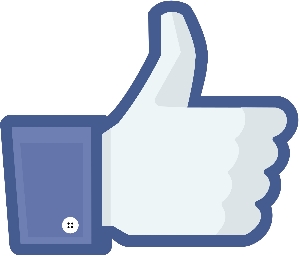 In the next few weeks, you are likely to lose at least a couple likes on your Facebook Page. It isn’t a sign people are losing interest in your brand however. Facebook has just announced they will stop including likes from memorialized and voluntarily deactivated accounts in the totals for likes on Pages.

The company issued the warning in a blog post yesterday, saying the move will help give businesses more accurate information about the people following their Page and improve ad targeting efficiency.

Over the coming weeks, Page admins should expect to see a small dip in their number of Page likes as a result of this update. It’s important to remember, though, that these removed likes represent people who were already inactive on Facebook.

According to Facebook, Page owners should not expect big drops. The average Pages should only lose a few followers, but any Pages who have paid for Likes or used other artificial means of inflating their total may see substantially larger losses.

Facebook is also warning Page administrators with an alert within Insights: 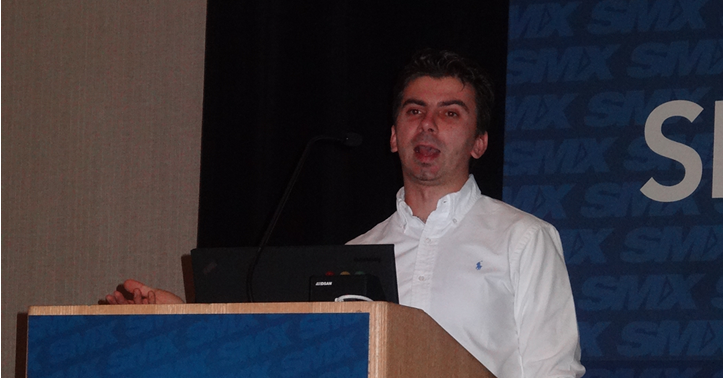 After months of hints, Google officially announced they would be including mobile-friendliness as a ranking factor in their search engine results last week. Now we are getting more information about how the mobile-friendliness signal will be implemented when it goes into effect next month.

Google’s Gary Illyes answered several questions about the new ranking signal at SMX West, where he explained the ranking factor would operate in real time and works on a page-by-page basis.

The conversation started when Gary was asked if there was a deadline for when webmasters need to have their sites updates to avoid being negatively affected by the launch of the signal. According to his response, the algorithm will operate in real time, so you could theoretically update any time you want and expect to start benefiting from the signal immediately.

Most likely, the signal won’t actually operate in real time for webmasters, but will reflect the version indexed by Google. That means sites that don’t get indexed very often may want to ensure their sites are updated soon, while sites that are crawled and indexed daily can address the issue when they see fit.

Google has not clarified, but all sites will still get the most benefit from having their webpages ready before the April 21st launch.

Gary also stated the algorithm will operate on a page-by-page basis, so you will need to ensure every important individual page is updated.

This is important for many webmasters who have sub-sections or unique areas of their page that would be difficult to make mobile-friendly. If you have pages that aren’t intended for mobile users, you don’t have to worry about them impacting your other pages.

If you have many pages that aren’t easily usable for mobile visitors, you might want to reconsider your strategy overall as more traffic is coming from smartphones and tablets every day. The new ranking algorithm is a big statement from Google about the importance of mobile in the current state of the internet, and you can expect to continue to struggle if you resist the changing tides.

Social media is all about crafting an image and that starts at the profile and cover photos. These pictures are the first things visitors see when they come to your profile, and it is essential to maintain a consistent image across social media. Unfortunately, trying to prepare your photos in the ideal sizes and specifications for the wide array of social media platforms can be a headache.

Every single social media site has their own specific sizes for images and many of the specs can seem almost random. Facebook requires 851px by 315px, while Google calls for 1080px by 608px and images on LinkedIn are supposed to be 646px by 220px. You can spend your time trying to come up with a mnemonic device to try to keep all the different image specs straight, but chances are your time is better spent elsewhere.

Thankfully, the team at Spredfast created a handy infographic which lays out the most recent photo specs for pretty much any social network you are likely to be on. The graphic details all the ideal photo sizes for profile pics and cover photos, as well as detailing the optimal sizes for posting photos to make sure cropping won’t ruin the image.

While Facebook may be the most popular social media platform, some brands are discovering Twitter can be just as effective for growing your business and turning followers into leads and sales. However, it isn’t always easy to start building a real fruitful presence on the site.

According to Search Engine Journal, only 34% of marketers on Twitter are successful at finding leads on Twitter. Does that mean the hugely popular service isn’t fertile land for marketing? Not necessarily. You just have to understand Twitter before you can expect to start finding good leads.

Too many companies just Tweet whatever they can think of without any sort of strategy. But if you take the time to learn the ropes and see what works and what doesn’t, you can start Tweeting with a purpose and drawing in loads of quality leads.

Over the weekend, HubSpot and Market Domination Media released this infographic filled with useful tips and statistics that can help you craft a game plan so you can turn Twitter into a lead generating machine with a little time and testing to find what works best for you.