Earlier this week we reported on a recent study highlighting the growing influence of online reviews, and there is no service as closely associated with online reviews as Yelp. Of course, Yelp agrees and they’ve commissioned a new study from Nielsen survey data to show it is the most frequently used, most trusted, and even the highest quality local reviews site. But, many are skeptical of their findings.

The study used a sample of just over 1,000 US users of review sites, including competitors such as Angie’s List, Citysearch, OpenTable, TripAdvisor, YP, and Zagat. The survey consisted of 22 questions in all and the sample was weighted for age and gender to be representative of Nielsen’s NetView audience. In a blow to the credibility of the survey however, it seems only a few of the results were released – presumably the results which favored Yelp.

Out of what was released, the survey showed that 78 percent of consumers use review sites to find local businesses and help make purchase decisions, with Yelp taking the lead in several categories such as “most influential,” “most trustworthy,” and “best quality reviews.”

Another source of apprehension for this study was the decision not to include Google or Facebook. When asked, Yelp told Greg Sterling:

Our findings specifically around review sites came after we included Google and Facebook in a question on what sites people use to find local businesses, but those sites aren’t solely focused on local business discovery. We dug deeper into those sites that are.

That led Sterling to the conclusion that Google and Facebook likely exceed Yelp as a source for local business information, but it isn’t dishonest to exclude them from a study focusing specifically on “local business discovery” because both platforms have such broad usage.

The study isn’t completely invalid because of these inconsistencies. It goes without question that Yelp is at the forefront of local business discovery and reviewing and several other studies show that Yelp is in fact influential in local purchasing decisions. This study reinforces the fact that Yelp is a major player in these categories, but obviously it should be taken with some skepticism.

You can see the graphic displaying Yelp’s findings below: 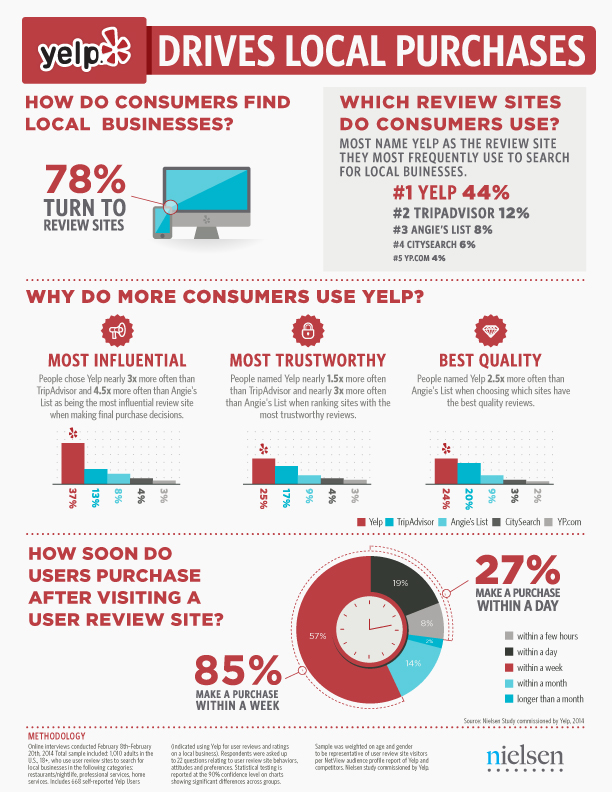 Google Adds "In-Depth Articles" To Search Results
How To Optimize WordPress For SEO
Large Guest Blog Network Disappears From Search Results After Penalty
Will The Yahoo Answers Update Give Marketers A New Opportunity?
SEO Basics: What's the Difference Between On-Page and Off-Page SEO?
Brittany Murphy and... SEO?
Celebrate Get Your Business Online Week
What Do Businesses Need To Know About Online Reviews? [Infographic]
0 replies

Social Sharing Rises 30% on Mobile Devices How Can You Boost Your Facebook Engagement for Free?
Scroll to top