It’s been a week since Microsoft dropped their “Scroogle” attack ads aimed at Google, but they are still running their “Bing It On” challenge trying to convince searchers that Bing is superior to Google. Yet, all of Microsoft’s attempts don’t seem to be working. Despite Microsoft saying Bing It On testers preferred Bing 2:1, Google continues to claim well over half of all searches.

This has Greg Sterling from Search Engine Land wondering why no one believes Microsoft’s and other competitor’s “Better Than Google” claims. Is Google’s brand just that strong? Does it come out of habit?

The most obvious reason people don’t buy Bing’s campaign is they are blatantly aware it is all marketing. They used the same principle as a blind taste test, but those types of tests don’t come off as explicitly biased as a website “blind” test. Just to get to the test you have to go to a website with Bing in the name.

No one is going to trust Bing’s statistics when they are that blatant about the test. There is nothing blind about going to “Bingiton.com“. It also doesn’t help that there is a big disclaimer at the bottom of the search page explaining how the test doesn’t use the full search capabilities of either engine. 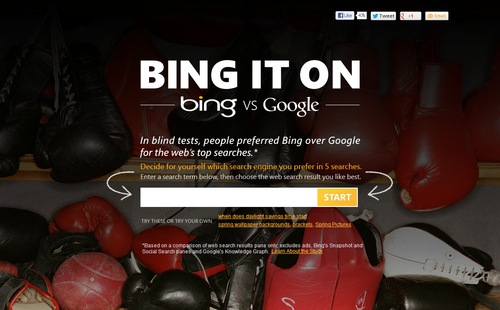 Google believes part of the reason users aren’t responding to Microsoft’s negative marketing is customers respond better to companies that “focus on building good products” rather than slinging mud. While Google remained as silent as possible on the “Scroogle” ads while they ran, now that they have been stopped, Google search chief Amit Singhal finally spoke about the issue at a SXSW conference, when taking questions from Twitter. “We focus on our users.”

Google’s right, customers don’t respond to negative marketing campaigns against well established brands as well as they respond to the new and innovative products Google is producing.

But, what about independent studies? A recent study by Butler University found that not only did Bing have better quality answers according to their criteria, but so did ChaCha, Ask.com, Bing, and Yahoo. Why has this type of study not put a huge thorn in Google’s side? One reason is Google’s incredibly strong brand. There is also the “Google Habit” or the comfort with the interface, but more than anything it is personal experience.

ChaCha may have better answers, but most users will agree it is not convenient enough for when you need to make a quick search and find a simple answer. Bing has been making users uncomfortable with their blatant attack ads, and any survey that puts Ask.com ahead of Bing, Yahoo, and Google will be heavily doubted in this age. The website lost its reputation years ago as other search engines grew, and it never regained it, just as Yahoo has steadily lost its market share to Google.

The only companies that can compete against Google are equally strong brands such as Amazon and Apple. Google is so well established in the American market, that it is hard to believe any study reporting that there are a handful of “better” ways to search. But, Google didn’t just install itself into ourcollective hive mind. Google is trusted because they offer a search engine users are pleased with, and they are constantly innovating new and exciting products. If they ever stop innovating, Bing might have a shot. Until then, attack ads and over the top marketing campaigns aren’t going to do much.

Less Than a Third of Marketers Properly Prioritize Mobile
0 replies