Are you afraid typos or grammatical errors in your blogs might be hurting your Google ranking? According to Google Webmaster Trends Analyst John Mueller, worry no more.

The good news is typos won’t hurt your search rankings. The bad news is they may still hurt you in other ways.

Responding to a Twitter user who believed that errors in content can hurt your Google presence by getting content marked as low quality, Mueller explained that Google doesn’t actually care that much.

It's always good to fix known issues with a site, but Google's not going to count your typsos.

“It’s always good to fix known issues with a site, but Google’s not going to count your typsos (sic),” Mueller wrote.

While that might be a relief for many, there is still the obvious issue of how actual people perceive content with typos. People are prone to forgive a mistake here and there, but error-filled or poorly written content is going to be dismissed by most.

Poorly written content comes off as unprofessional and won’t help build your authority like well-edited, well-composed content. So, while you might be able to get away with some typos on Google, it always pays to take the time to edit and revise anything you are going to publish under your company name before the public ever gets to see it.

Report Shows Almost Half Of All Traffic Comes From Bots 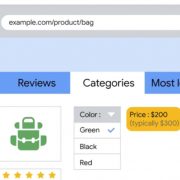