Facebook is launching a major overhaul called Shops which will make it easier for brands to sell their products to users without sending them off the social network.

In theory, the move would allow e-commerce businesses to operate their entire business over Facebook, without an external website or online shop.

With Facebook Shops, businesses can turn their Facebook pages into completely shoppable storefronts. The company also plans to extend the feature to Instagram in the near future.

While the service is free to set up on the social networks, it is powered by third-party services such as Shopify, BigCommerce, and Woo which tend to require a fee or subscription to use. Additionally, the service will charge a fee when customers complete a transaction using the feature.

Businesses will also be able to include their shops in Stories or buy ads to promote their shops and products across the social networks. However, it is unknown exactly what those ads will look like when they arrive.

In a blog post, Facebook indicated they will be working to integrate loyalty programs into their online shop sometime soon.

“You’ll be able to easily see and keep track of your points and rewards,” said a company representative. “And we’re exploring ways to help small businesses create, manage, and surface a loyalty program on Facebook Shops.”

While discussing the move in a live stream, CEO Mark Zuckerberg suggested that brands struggling to recover from the COVID-19 shutdowns could use the feature to connect with new and existing customers.

“If you can’t physically open your store or restaurant, you can still take orders online and ship them to people,” said Zuckerberg. “We’re seeing a lot of small businesses that never had online businesses get online for the first time.”

This is a huge shift from how Google has treated the section in the past. Since 2012, the Shopping tab has been exclusively for paid product listing or ads.

The decision comes during the ongoing shutdown of many local businesses, driving consumers to online retail. In particular, Amazon has seen a massive surge in usage this month.

Although the company says it had plans to open the Shopping tab for organic listings before this, Google’s President of Commerce Bill Ready noted the ongoing crisis was a major motivation for “advancing our plans to make [Google Shopping] free for merchants.”

Importantly, the change is permanent and will not revert as businesses across the country begin to reopen.

“For retailers, this change means free exposure to millions of people who come to Google every day for their shopping needs,” said Ready. “For shoppers, it means more products from more stores, discoverable through the Google Shopping tab. For advertisers, this means paid campaigns can now be augmented with free listings.”

What Happens To Paid Shopping Listings

With Google moving to make the Shopping tab more like its traditional search engine results pages, the company will begin treating paid shopping ads similarly to ads shown in other areas.

Paid shopping ads will primarily appear at the top and bottom of results pages in the Google Shopping tab. Additionally, carousels of product listing ads will continue to be only for paid ads.

How To Get Your Products Indexed

Google says the revamped shopping tab will continue to be powered by product data feeds provided through Google Merchant Center. Although GMC was once a paid service, the company opened the Merchant Center to all retailers for free more than a year ago, as it began to integrate organic product listings into search results across the platform.

To get your own products included in search results within the Google Shopping feed and elsewhere across Google, you’ll need to start a Google Merchant Center account and upload a product feed detailing the products you carry. Additionally, you must opt-in to “surfaces across Google” to be included in organic results. 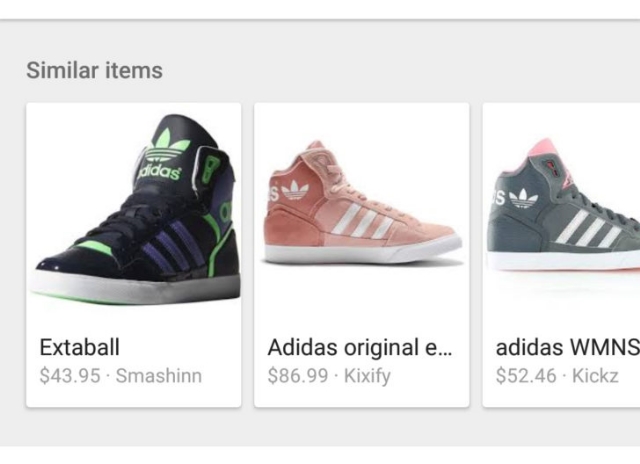 Google Image Search is making it easier for consumers to find the exact item they’re looking for with a new “Similar Items” suggestion area on searches from mobile devices. The company says the new feature will also help shoppers find new products that compliment one they were already looking for, opening an entirely new door for potential sales.

For the moment, the suggestions feature is limited to just handbags, sunglasses, and shoes. This is to allow Google to refine the feature and guarantee it is providing relevant results for searchers. Over the next few months, they aim to expand to include other apparel and potentially home & garden items. 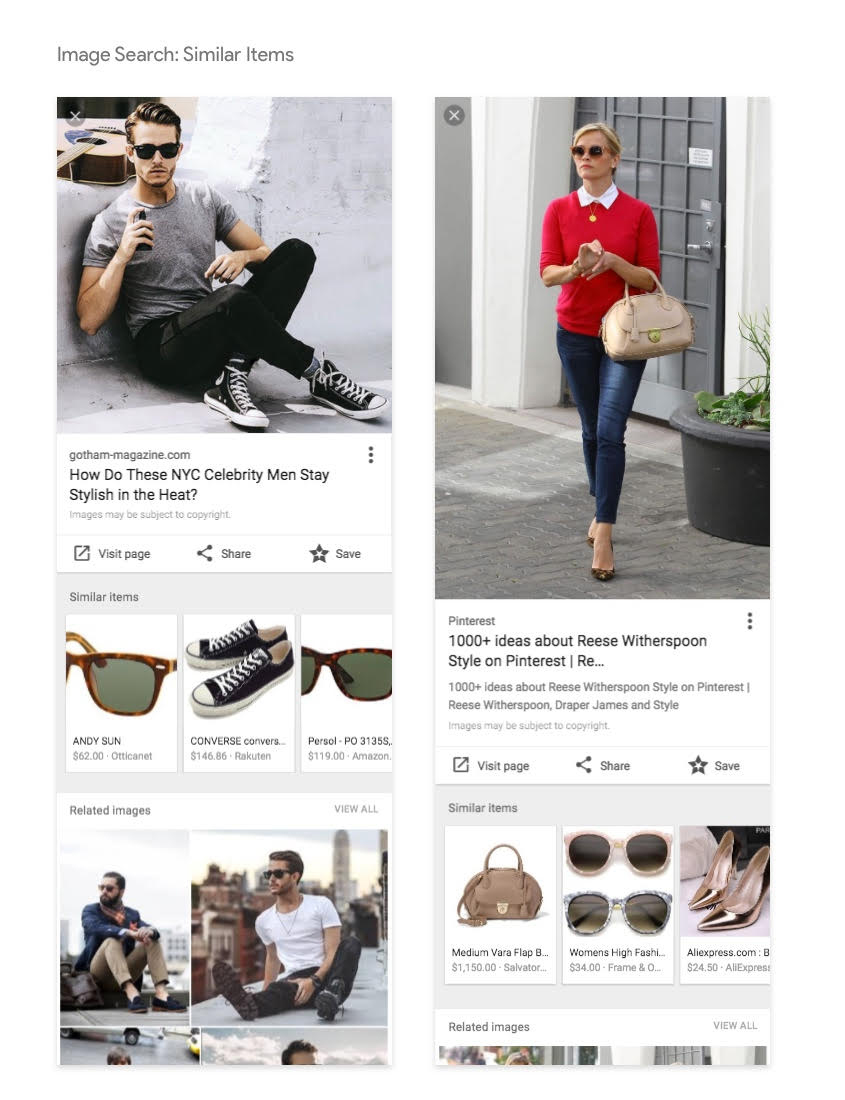 In the same stroke, Google has also made the existing product results in image searches more useful for consumers by displaying price and availability information in results.

Including your products and services in the “Similar Items” feature requires adding Schema.org product metadata to the pages for every product you want to include. Theoretically, this would mean you could also exclude specific items from “Similar Items” results if desired.

The metadata markup tells Google the name, image, price, availability, & currency your business uses to include in search results. Once you’ve added the markup, it can take up to a week for Google to crawl your new data and add it to the search results.

If you’ve already implemented Schema metadata but your products aren’t showing up in the results, you may test your pages with Google’s Structured Data Testing Tool to check for errors that may be keeping your products out.

Man people across the country are scrambling to get a last minute Halloween costumes as the holiday grows closer, and that means marketers are making their final Halloween ad push. This is especially true for e-commerce sites who make up are hoping to get their own chunk of the nearly $7 billion spent annually on Halloween costumes.

Thankfully, your e-commerce site can still reap its own piece of the pie, so long as you move fast and know what customers are looking for in the final days before ghosts and vampires wander the street for a night.

Nextopia investigated online Halloween purchasing behavior and shared their findings in a convenient, easy to understand infographic (seen below). So long as you know when and where people are spending the money, e-commerce can be a hugely successful market this time of year.

If you’re a small retailer trying to expand your brand online, social media is an absolutely essential part of the plan. But, there are several different popular social media platforms and most smaller retailers don’t have the resources to invest fully in all of the big platforms. How do you choose which one to favor?

Of course, the best choice for your brand depends on what you are offering to consumers and how you are trying to reach out to them. But, you can also take some notes from what the big retailers are doing with their social media, with the help of social technology company 8th Bridge’s third-annual Social Commerce IQ report.

8th Bridge looks at nearly 900 of the top online retail brands, and evaluates their social adoption and subsequent results.

Their results show two things. Firstly, you should implement social website buttons for at least the three major social media platforms for retailers (Pinterest, Twitter, and Facebook). Secondly, and more importantly, Facebook still dominates referral traffic and perceived value. However, the reasons for Facebook’s value to top retailers have changed.

In the past, Facebook has always been favored simply because it was the most popular social media platform by a large margin. However, Facebook has become very competitive, especially for smaller businesses. With so many businesses sharing content on the site, the top retailers have turned to Facebook Exchange to pay for visibility and higher traffic rates.

Facebook is valued by top retailers not because they are the top social platform, but because they have the most viable social advertising platform.

This has the potential for change in the near future however. Facebook has one of the most fully-realized social advertising platforms, and it has been around for significantly longer than the ad options most other platforms offer. For instance, both Pinterest and Instagram are still only in the testing phase for their advertising platforms.

Still, the traffic referral statistics from Twitter may suggest a deeper underlying problem in the social platform’s viability for retailers.

In the end it should come as no surprise that Facebook is still the most reliable social platform for brands of most sizes, but it will only get more competitive. You can still benefit from a non-paid approach to your Facebook presence, but you should expect diminishing returns as time goes on.

You can view the infographic 8th Bridge made from their results below or on their site.

The holiday shopping season is currently at a fever pitch, where it will likely stay until Dec. 26th, and more and more consumers are using the internet to aid their purchases. Online shopping isn’t new, but the prevalence of smartphones has made it easier than ever to turn to the internet to find what you need and shoppers aren’t shy about consulting the web before any purchase.

But, how does this affect shopping patterns and what are these consumers looking for exactly? If your brand is online, chances are you want to capitalize on the huge amount of online shoppers both at home and those using their smartphones while they shop. Unfortunately, a new survey from Search Engine Land and SurveyMonkey suggests this may be harder for smaller brands to do than anticipated.

It shouldn’t come as any surprise that many online shoppers are looking for well known brands, but it might raise your eyebrows to learn it is the most important factor to many shoppers. The survey conducted on November 21-22 of this year shows that 70% of shoppers are focused on finding brands they are already familiar with. The only other factor which received over 50% of the response was free shopping.

The good news is this doesn’t spell the end for local businesses trying to grow their brand during the commerce season. Location and reviews still made a strong showing in the results, as did sales. Many shoppers also focused on retailers who offer images and easily viewable prices for their products.

Smaller brands can also take some solace in knowing the survey was limited to a relatively small sample size of roughly 400 Americans using SurveyMonkey Audience. You can see a chart of the results below. 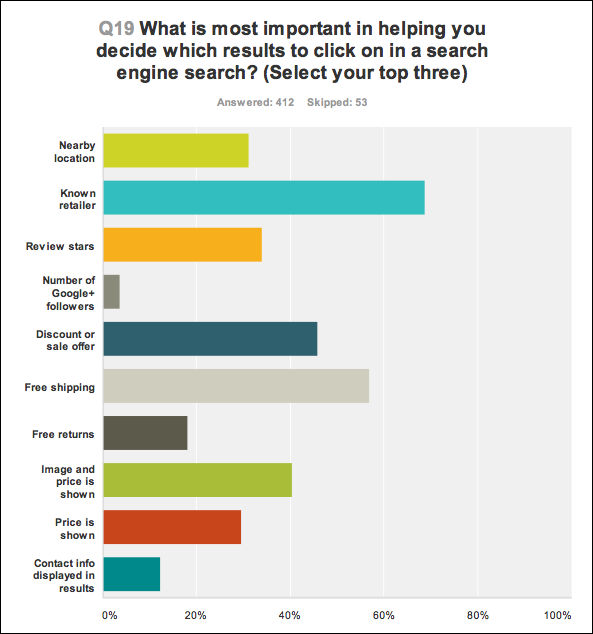 Social media is the newest online wave of excitement.  Everyone is getting into it, and a lot of people are wondering – how can I make it work for business?  Well, there are several ways to do it, but not all of them are functional.

ZippyCart has put together a good list of specifics you can use to guide your business through Facebook, Twitter, and more.  Look through them to help improve your business social media.