Twitter has become an undeniable force in modern culture. Even if you aren’t signed up for the social media platform, you can hardly turn on the television without being bombarded by tweets and hashtags.

Every major news network solicits tweets from their viewers in order to get real-time responses to issues, and any new episode of a show is bound to have at least one hashtag hovering in the bottom corner of the screen.

But, those TV hashtags highlight one of the biggest problems with Twitter: few people actually understand hashtags or how to use them efficiently. Sure, we all know how to tag Instagram photos with them, or we slap a silly hashtag on the end of tweets to add a little more information, but the number of people actually using hashtags to organize and sort through the constant tidal wave of new tweets is actually quite low.

It isn’t that Twitter’s users aren’t smart enough to use hashtags more efficiently, but it is difficult to make hashtags a very useful sorting device without going through a middleman. Twitter’s search engine can let you broadly search hashtags, but if you want to actually make sense of the mess you most likely need an extra tool to help you out.

Ann Smarty from Search Engine Journal pulled together five such tools to help Twitter users everywhere turn hashtags into a vital part of their information consumption every day. If you want to be smart with your hashtags, these tools are the best place to start.

When Twitter began using hashtags, it didn’t take long for users to figure out that the tags can be used to create a conversation between numerous people. Rather than directly messaging an individual, you are able to put a topic or “chat title” in the form of a hashtag so users are able to create a real discussion. But, the conversation was still cluttered and not well laid out for the average reader.

TwChat allows you to take those hashtags and monitor them in real time. It also lays the tweets in a more cohesive way, so that you can more quickly read and understand the conversation. Best of all, it is super simple to use, free, and doesn’t require downloaded software.

Originally, there was an unspoken rule that hashtags should be easy to understand at a glance. Obviously, this rule has fallen apart over time. Hashtags tend to be a combination of slang, inside jokes, and promotional material that makes no sense without context.

With the help of TagDef, you won’t have to worry about not being caught up with the latest American Idol hashtag or the slang younger people are using to keep up with the meaning behind hashtags popping up in your feed. The tool lets you search a hashtag and get the meaning instantly. You can also edit and add your own meanings. TagDef acts like Urban Dictionary exclusively for hashtags (and potentially a little less focused on profanity).

Hashtags gained its reputation as the largest hashtag database on the web, but there is much, much more there. The site includes analytics, how to articles, blog posts, a chatroom, a forum, a hashtag dictionary, events, trending hashtags, popular hashtags (long-term), and even more.

Of course, hashtags aren’t limited strictly to Twitter. The history of hashtags goes all the way back to IRC chats, but they have spread to nearly every major social networking platform out there. Facebook, Instagram, Google+, and Vine have all implemented the organizing tool. Tagboard takes hashtags from across all those different platforms and displaying them all on one page. You can even use it as a social network dashboard, allowing you to like, share, or retweet as you desire without ever having to leave the site. 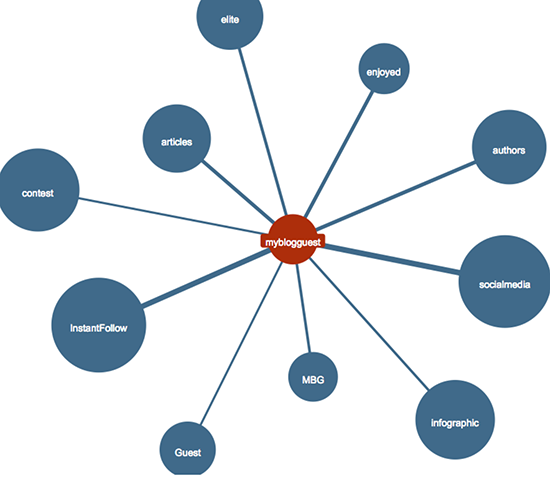 There is no rule you have to use only one hashtag per post. In fact, many add three or more hashtags on a large number of their posts, but it can be hard to see how they are related from Twitter’s site. Hashtagify helps you see how different hashtags are related and their usage patterns, as well as offering in-depth analysis in their pro version. They also have active breakout alerts, so you can always be the first to know about the new cool hashtag.

7 Thing You Need to Know About Mobile SEO

The Biggest Shifts In SEO You Need To Know For 2015

Get a Visual Perspective on Your Link Profile