March Madness is upon us and everyone is getting into the spirit, including Bing. The search engine has launched their smart answers in the search results for March Madness and other related searches to see brackets, scores, and predictions.

Users get three options above the normal search results for the basketball tournament. The default view shows the current bracket results, but users can also build their own brackets and see Bing’s predicted outcome. On top of all of this, Bing also offers the schedules and teams playing in the competition.

Below you can see a screenshot of the default view for bracket results, which expands by clicking on the down arrow or the results button: 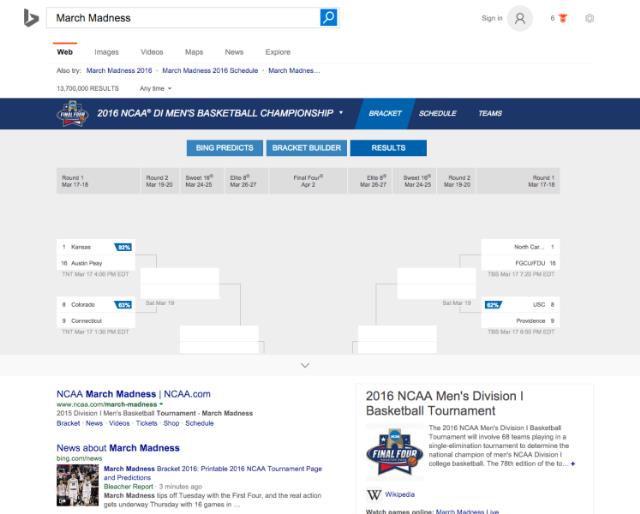 If you choose to view Bing’s predictions, the window gets even bigger. Barry Schwartz captured a large screenshot, which you can click to enlarge:

Now that the bracket has officially been announced, our data scientists are in the lab, working tirelessly to perfect their models so our smarter bracket is powered by Bing Predicts and ready for you to access by Monday morning. Stay tuned for an updated analysis of the Bing smarter bracket on the Bing blog tomorrow. 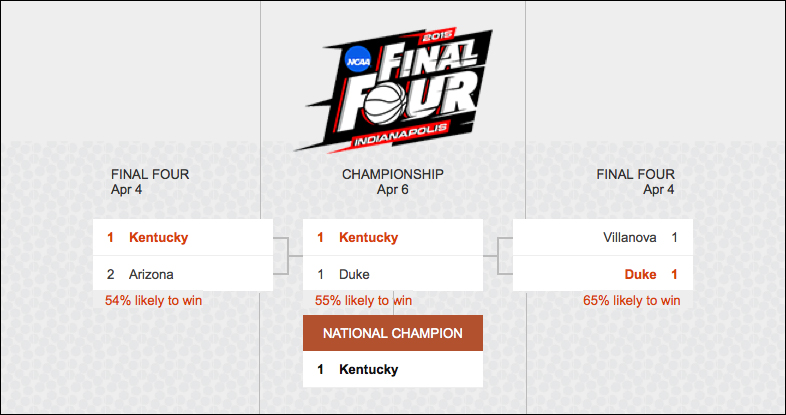 The first round of March Madness games begin in earnest tomorrow and Bing is helping you get prepared for the big NCAA tournament. The search engine is offering predictions and tournament brackets so you can gauge the best picks for each match-up and even get in on the action by submitting brackets to the official contest on NCAA.com.

Anyone searching for terms such as “NCAA,” “March Madness,” or “college basketball” will immediately see the entire tournament bracket, as well as Bing’s predictions for every one of the 69 games.

The responsive search features are the result of a partnership between Bing and NCAA announced last week, which allowed Bing greater access to stats and data. According to Bing, the wealth of data took over seven hours of data crunching Sunday evening to prepare their predictions this soon.

In a blog post, Bing Predicts chief Dr. Walter Sun claims there are more than 9.2 permutations involved in the tournament bracket, and explains how Bing used over 10 years of data to inform its predictions.

This includes offensive and defensive statistics, conference success in previous tournaments, the proximity of tournaments to each team’s home campus, the style of each team, their individual strengths and weaknesses, and many other factors which might result in them favoring certain match-ups over others. After ingesting these initial data sets, we applied our analysis of web and social sentiment to tune our predictions, resulting in projected outcomes for each of the 67 games of the tournament, including both predicted winner and probability of the team winning. We then present to you the 1 bracket which we think is the most likely to transpire.

Bing has pegged the Kentucky Wildcats as the team who will take the championship this year, which isn’t exactly a daring prediction given the team’s perfect 34-0 record. Bing’s team of statisticians are not the only team thinking the win streak will leak the Wildcats to win it all. The analysts from Nate Silver’s fivethirtyeight.com give Kentucky a 41 percent chance of winning. For comparison, the second most likely team, Villanova, only received an 11 percent chance.

Bing’s partnership with the NCAA has most likely given the search engine a lead on preparing this search feature. Currently searching for anything similar doesn’t show anything special on Google, but that will most likely change before the opening games tomorrow.