Looking for your favorite music video? Since MTV hasn’t shown music videos for the past 20 years, you will probably turn to Google. Now, Google is making it easier to find the videos your searching for by giving more prominence to the top playable music video result. So, if you’re searching for “Get Lucky” by Daft Punk, it will be hard to miss the official version of the video at the top of the page. 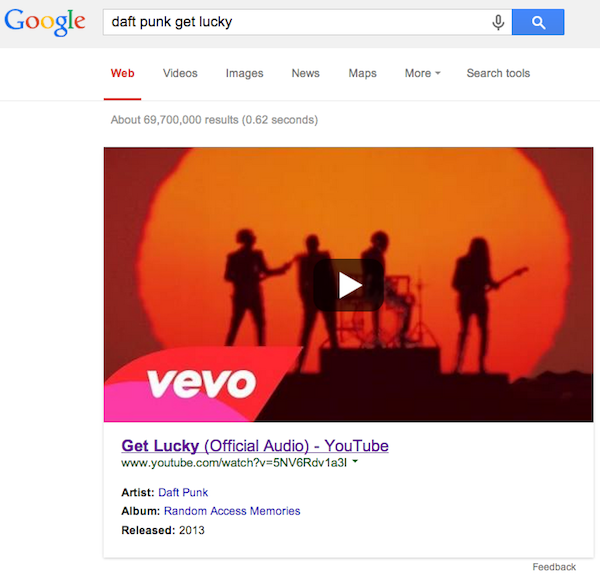 The thumbnail images for the videos look like they would be playable on the page, but in actuality they link back to the page for the video. It’s possible they play icon on the image might hint towards future usability for YouTube videos, or it might just be a little misleading.

Of course, the tool isn’t perfect, and you shouldn’t expect to get the “official” video or a video from the artist’s official account every time. For example, Search Engine Watch highlights a case where searching for “Let Me Ride” by Dr. Dre doesn’t pull up a video from the DrDreVEVO account, because that video hasn’t been uploaded to the official account.

Similarly, searching for “I Need a Doctor” by Dr. Dre doesn’t trigger the new large YouTube thumbnails, even though there is an official video uploaded to the account. 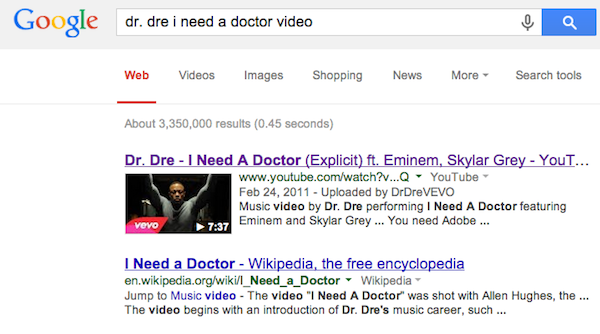 “This was already available in September 2013 when you searched for an artist and then clicked on a song – you’d see a preview of the music video if it was available to display,” said a Google spokesperson. “Yesterday we made it easier to get to – you can now just search for a song directly and see the video screenshot right away.”

It is notable that the huge thumbnail appears to be exclusive to YouTube. When Google pulls from other sources like Dailymotion, it shows the smaller thumbnail and link layout. For example, the video for “Simply Beautiful” by Queen Latifah looks like this: 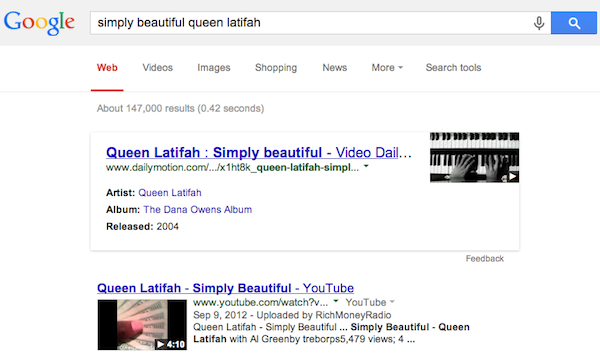