Android phones may be outselling the iPhone, but proof that iOS users are more engaged with their devices just keeps coming. The latest confirmation that iPhone users are on their devices more often with more engaged usage comes from a third-quarter “Global AdMetrics” report from mobile DSP and ad buying platform Adfonic. Their study claims that in Q3, on a global basis, Android and Apple devices accounted for 95 percent of all add impressions on mobile devices.

However, Apple and Android weren’t as close as you would normally think. Apple claimed nearly two-thirds of all mobile ad impressions, while Android only received 32 percent, a 6 percent decline from the previous quarter. This wouldn’t be so interesting, except Android has a huge advantage over Apple in the global market share. According to Greg Sterling at Marketing Land, around 80 percent of all global smartphone shipments in Q3 were Android devices.

Previous reports have shown that iPhone users are more likely to purchase, spend more time with their devices, and are more engaged with their device when using it. It is obvious that there is a large difference between the types of people purchasing mobile devices, and their needs certainly aren’t uniform. Android may have the lead on sales, but it can be assumed that many of their customers simply choose an Android phone without the intention to utilize all of its capabilities, while iPhone users are more likely to desire a phone they can rely on for all of their mobile and online needs.

Over the next few days you might notice some changes to the way Google displays their mobile AdWords ads. Search Engine Land reports Google is currently testing out a new look which simultaneously makes the entire result page look more cohesive while keeping ads clearly labeled.

The first change you will likely notice is the way Google is using color. Google have been using lightly colored backgrounds to signify ads, but with this test they may be moving towards placing both ads and organic listings in white boxes in front of a gray background. Similarly, the gray background that has been behind the Google logo and search box is gone.

Instead of identifying ads with colored background, there is a new eye-catching yellow ad icon directly next to the display URL. The icon is significantly more attention grabbing than the old small “ad” that was previously to the right of the headline.

You can see the new style being tested above, while the current version is below. 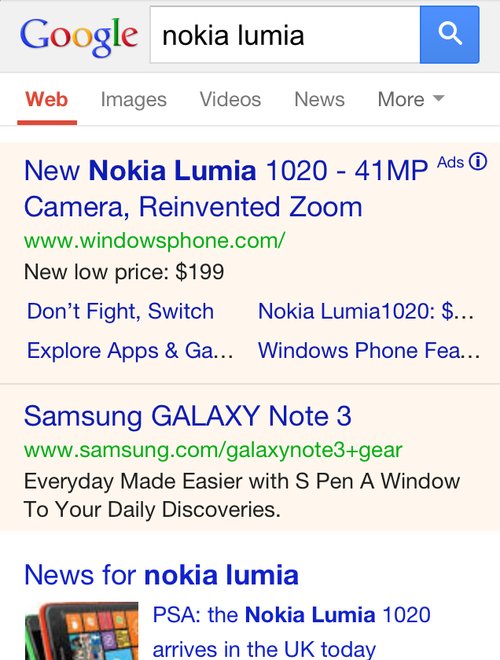