Most people view PageRank as that value from 0 to 10 that’s in your Google Toolbar, showing how much reputation your site has on the internet. There are some details that you should know if you really want to understand PageRank.

The PageRank algorithm actually outdates the Google search engine as we know it today. It is not named for the rank of web pages (as many may believe), but is named after Larry Page who developed the algorithm. PageRank was created before the founding of Google, but is still used today as a major element in how Google populates its search engine results pages.

The basic functionality of PageRank is often compared to water and the flow of it (also often termed “link juice”). Each web page has a certain amount of PageRank flowing into it, and begins with a set amount. The full algorithm of PageRank can be seen in the paper “The Anatomy of a Large-Scale Hypertextual Web Search Engine” written by Sergey Brin and Lawrence (Larry) Page at Stanford. It is listed as follows:

We assume page A has pages T1…Tn which point to it (i.e., are citations). The parameter d is a damping factor which can be set between 0 and 1. We usually set d to 0.85. There are more details about d in the next section. Also C(A) is defined as the number of links going out of page A. The PageRank of a page A is given as follows:

Note that the PageRanks form a probability distribution over web pages, so the sum of all web pages’ PageRanks will be one.

Looking at this algorithm, the damping factor reduces initial PageRank to a value of 0.15 which is then adjusted based on the PageRank of pages pointing to it (backlinks).

Thinking back on the “flow” concept of PageRank, the way PR flows out of a page can be thought of like a container with holes in the bottom it. However many holes are in the container, the same total amount of water will flow out from it. And we can assume the holes are the same size, because the flow is the same from each. With an amount of 100, if we poke two holes in our container (two links going out from our page) we will have a flow of 50 from each hole. If we were to poke two more holes, then that flow is reduced to 25 from each. This is how PageRank flows out from web pages, through all the links that go to other pages (on the same site or a different site, it does not matter). It can be more easily seen in this image from one of the original PageRank papers: 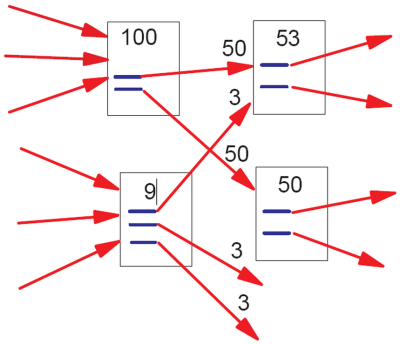 When looking at this, you can see that the more links you have on a web page, the less PR each link contains.

Looking at the PageRank value in the Google Toolbar, this value is not actually a value that corresponds real-time with what the true value of a page’s PR is. This is a value that’s updated about 5 times each year, and is only an approximation of true value of PageRank on a scale of 0 to 10. This value is often incorrect as it can be out of date. Google has never given the actual algorithm for this Toolbar PageRank, and the true value of PageRank for any given page is not known outside of Google.

Google added one change to the flow of PageRank in 2005, known as the “nofollow” option. This is an adjustment that can be added to any link (by adding the phrase rel=”nofollow”), meant to ignore all influence to PageRank. This was added to help fight spam, so that PageRank would not automatically flow to pages set in comments sections. The “nofollow” option in the water flowing analogy can be thought of as plugging one of the holes in the container – the same amount of value is now distributed evenly among all of the remaining open holes/links.

However, Matt Cutts from Google published a blog post in June of 2009 that revealed Google no longer redistributes PR to links that don’t have nofollow. According to Cutts, each nofollow link still absorbs the set amount of PageRank, it just does not distribute it to the link that it points to. This means a page that has a PR of 10 with 5 follow links and 5 nofollow links will only send each follow link a value of 1, not 2.

This has caused a large commotion (especially among the SEO community), since with this change it would appear that PageRank is being lost with nofollow links. Leslie Rohde has done an excellent investigation into the nofollow change, and according to him this change in algorithm has not truly affected PageRank flow.

This information about PageRank should give a good idea of how the flow of PageRank happens from page to page. It flows to and from pages, independently of domain (either on-site or off-site, it still flows equally). How this fits with SEO is still a bit of a mystery as the full adjustment of search engine result pages in conjunction with PageRank is unknown outside of Google. However, it tends to be seen that two pages with equal SEO elements differing only by PageRank will always put the page with a higher PR first. In the eyes of Google, it appears that level of PageRank is equivalent with page quality, and Google always wants to rank quality pages higher. Keep in mind that this does not mean a page with a Toolbar PageRank of 2 cannot show higher in listings than a page with a Toolbar PageRank of 5, if the first page has better SEO.

Knowing this, it’s best to try building PageRank for site pages when doing SEO to help increase positions for targeted keywords, but do not neglect standard SEO practices to help the total improvement in ranking.

How to Increase PageRank

To increase PageRank, you can look at the image above to see how it works. To get more PR to a particular page, you simply need to have a link from a high-PR page. The fewer links on that page, the more PageRank your page will receive.

However, not all links pass value, even without a nofollow tag. Some pages Google will flag for lack of quality (such as link farms), and any links from these pages will not pass PageRank to the pages they are linking to. This means while getting links to your page will help, getting links from higher quality pages is always a better idea.

Also realize that purchasing high PR links does not go unnoticed by Google. If they detect that high PR links were purchased, the value of these links will often be dismissed and have no influence in PageRank on the page they are linking to.

All things considered, to build PageRank it’s best to get natural quality links from pages that have a good level of PR and not an overabundance of outbound links. Knowing how to do this well can make all the difference in doing good search engine optimization work.

Yahoo Loses Its Grasp as Google Regains Search Share After Mozilla Deal
Quick SEM News of the Week - May 16, 2014
Raise a Glass, Google's PageRank Toolbar is Finally Gone For Good
Google issues a strong warning against using guest posts for links
Does Google's Disavow Tool Really Work?
Google Rolls Out New Search Results Design for Everyone
Adwords Will Soon 'Optimize for Conversions' By Default
How To Dominate Search With Content Marketing
0 replies