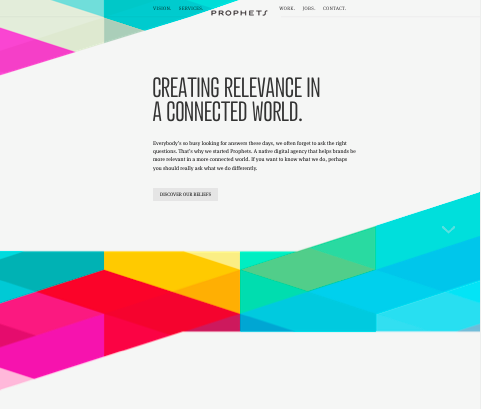 For those who aren’t watching closely, it can be hard to tell how much the color trends in design change. With such a diverse range of sites using different design styles from neons to earth tones, monotones to color clashing, how can you tell what is part of a trend or just a personal designer’s unique choice?

The truth is, most designers are influenced by design trends. We have to be, as we design for others. We have to keep up with what everyone likes visually, even when they aren’t quite aware what they like about it. This year has seen several distinctive trends either popping up out of almost nowhere, and a few who are finally catching on after slowly spreading. Brandon Hill from Design Madness broke down the color palettes and stylings we’ve been seeing all year, to help you design for what audiences are subconsciously loving.

1) All Emerald Everything – One of the biggest trends of the year isn’t inspired so much by popular tastes but by a simple influential recommendation from Pantone. Every year Pantone chooses a single color as their “Color of the Year” and this year Emerald won the distinctive title, and since then it’s been hard to ignore how prevalent it has become. It works well as a strong background color, accent, contrast, and in many other ways, while still feeling fresh. We’ve recently covered the ways designers are enlivening emerald, but suffice to say the color of the year could quite possibly stick around a while.

2) Blacks and Blues – The web has traditionally been set upon a white or like background color as text has usually been a focus. However, thanks to an increased attention on images, and more flexibility with text styling, dark colors like black, browns, and dark blues have become popular for “edgy” or “aggressive” sites. Whether you want to create a mood of foreboding or mystery, black has become a much more viable way to make your site seem cool or intense.

3) Grays and Accents – Gray has long been a loved neutral color for website designers. It doesn’t feel as empty as white when used as a background, and it pairs well with anything. Lately, designers have been choosing to pair this gray with neons and pastels to create heightened accents and playfulness. The rise of this style could be in part helped by flat design, as it works great as a simple neutral that still makes a page feel full.

4) Monochrome – Blame Facebook and Twitter, but the monochrome look is peaking this year, especially when combined with natural colors such as blues, greens, and often grays. It isn’t uncommon for designers to spice up this style with one or two accent colors to draw attention to important site elements like a call to action, but the monochrome look also creates a sense of cohesiveness which many brands find attractive.

5) Color blocking – Color blocking has come and gone in web design before, but its recent rise has been one of the most noticeable changes in design over the past year. The biggest difference between now and past trends that favored color blocking is the trend is now being used more for website functionality than aesthetics. Color blocks are being used as signifying icons of navigation menus, blocks of content you can select from, site categories, and every other way a designer may geometrically organize their site.

The through line of all of these is a recent focus on simplicity. Flat design is growing, and designers have been streamlining and employing minimalism more and more. The color trends of the year reflect this, while also bringing diverse design techniques that make simple color styles feel exciting and new.

What Is Flat Design, Really?

Blue: The Color of Business

Keep Your Fonts Organized With a Font Management Tool

What Does Red Mean in Web Design?