Businesses are increasingly using Facebook to advertise their business to one of the largest audiences in the world, but a new survey suggests many businesses are forgetting social media is a two-way street.

According to a Sprout Social study, the majority of retailers are ignoring their customers’ requests on social media, a finding which is very troubling considering consumers are turning to social media to seek customer service and find information about businesses.

The statistics from the Sprout Social Q4 2015 index say retailers failed to respond to over 80 percent of consumer questions and requests on social media over the last year. Perhaps surprisingly, retailers were least likely to respond during the holiday shopping season. Throughout Q4 of 2014, only 16.35 percent of customer queries to retailers received any form of response. 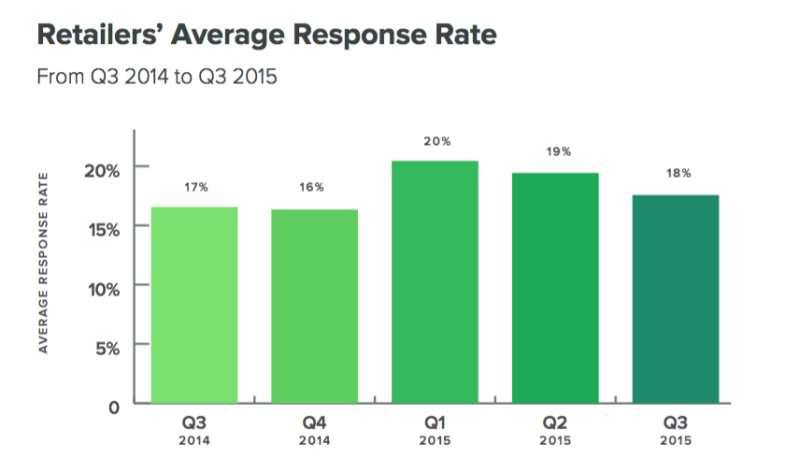 It is understandable that retailers are swamped during the holiday season, and may not have the extra man-power to closely watch social media. However, totally ignoring your customers on Facebook, Twitter, and other platforms can create a tidal wave of unhappy customers and lost potential buyers.

Retailers saw a 21-percent increase in inbound social media messages in the last quarter of 2014, but the majority of those went unanswered.

“Social media is an integral part of consumers’ daily lives and a critical communication channel for brands to engage in conversation with their customers during the holidays,” Sprout Social CMO Scott Brandt said in a release. “Whether answering a product question or confirming a customer’s gift order, brands have an opportunity to positively influence awareness, customer loyalty, positive sentiment and seasonal sales through social media engagement.”

One problem appears to be that retailers aren’t paying attention to where their customers are trying to reach them. In the past, Twitter has been the primary social media platform for customer service related questions and requests. However, Sprout Social’s study suggests a shift is occurring as more shoppers rely on Facebook to contact brands. 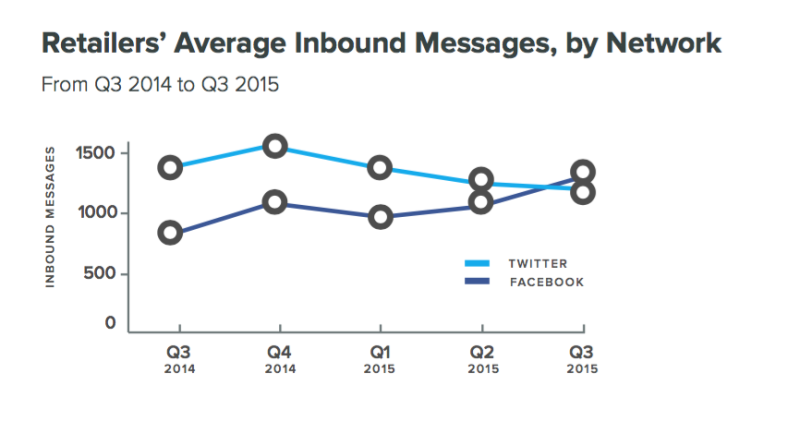 It appears retailers haven’t picked up on the shift though, because the new statistics show retailers sent out 114 percent more messages on Twitter in the last six months.

“It’s worth taking a deeper look at customer service on Facebook since it is generally where people are seeking answers from retailers,” said Brandt. “Bottom line: You should be able to improve your response rates and times if you understand where people are reaching out to your brand in the greatest numbers.”

For more interesting findings from the study, download the full Spout Social Index for free here.

Perhaps one of the most effective ways to market your business on social media is to use it as a customer service tool. The benefits include being able to publicly respond and alleviate any negative feedback or issues and it shows other potential customers that they’ll have a direct line to you.

As Business Journal reports however, great customer service, which in turn means great PR for your business, doesn’t happen by accident. It takes planning and effectively executing that plan.

That all starts simply enough by having the right people in place. If you want great customer service, you should employ a staff capable of humanizing your social media presence while staying within your desired message. Second, in order for them to execute your plan, they have to know what it is. You should clearly define and spell out how quickly they should respond to messages and a plan of action of how to deal with them.

At this point, social media in some form has been incorporated into most businesses. The most obvious way to use it is to incorporate social media into your sales and marketing strategy. But, you can also greatly improve your customer service in a variety of ways simply by posting on a social media platform.

Mike Gingrich of the Goshen News has some great examples of how social media can not only improve your customer service, but in turn improve customer satisfaction and brand loyalty.