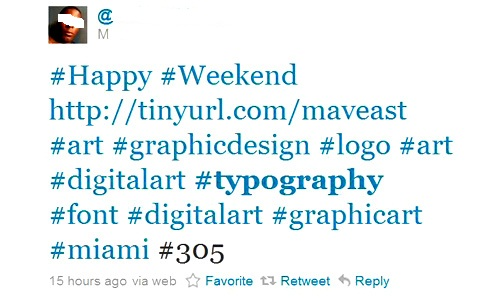 Trying to get users to click the links in your tweet? Well if your tweets look anything like the one above, you are in trouble. A new study indicates hashtags or mentions actually drive down engagement on the social platform.

Twitter recently released a study advising users how to use one of its newest ad units called direct response ads, and the report contains quite a bit of useful info. It may also prove once and for all that hashtags are a click killer.

The study found that direct response ads including either a hashtag or an @-mention performed the worst of any ads included. By just including a hashtag or mention, you lose almost a quarter (23%) of all your potential clicks.

Anne Mercogliano, head of SMB marketing at Twitter, believes other clickable parts of the tweet distract users from the actual link you want them to click, especially when looking at a glance. However, Mercogliano doesn’t believe the results mean brands have to cut hashtags out of their lives completely.

“If you’re trying to join a conversation, you should absolutely use a hashtag… But for driving for a specific click that you’re looking for off Twitter, the less noise that you put in between [the better].”

The new study is the latest in Twitter’s effort to use data to help guide users on how to best use its service. In the past, Twitter has also released data-backed tips on how brands can best engage with millennials and how to engage with users of any demographic.

Facebook Says It Doesn't Charge For Ads Unless They Are Seen

Periscope Goes Big With Features For Both Advertisers and Users