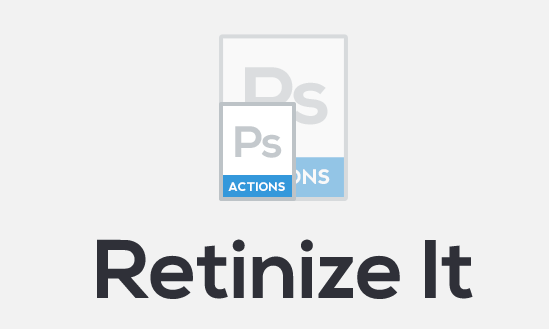 Making “retina-ready” images isn’t exactly difficult, but it is definitely tiresome and far from fun. No one likes looking back on all of their website’s images and having to painstakingly go through and rescale and resave individual images all day. That’s exactly why web design tools are so popular. Designers aren’t quite lazy, but boy do we hate doing tedious tasks.

Artiom Dashinsky from Tel-Aviv was the designer who decided this issue needed a free tool to speed up creating high definition images for high density “retina” screens. His creation, “Retinize It” is an automated set of two Photoshop actions.

As Noupe explains, the first action slices a selected layer or group into a single image, then opens the dialog for saving the image for the web. The second one does the same, scaled the sliced area up 200-percent, and reopens “Save for Web” so that you end up with two differently scaled versions of the same image almost automatically.

Before you use Retinize It, you should always make sure your image relies on shapes or has been turned into a smart object. Traditional pictures will just be pixelated by the simple upscaling.

Dashinsky’s tool is far from revolutionary, and won’t accomplish much that any competent designer wouldn’t be able to do for themselves, but it cuts down on wasted time spent manually reworking individual images.

Design Lessons Learned From iPad Apps
Quick News of the Week - April 25, 2014
What Are You Supposed To Do If You Think You've Been Hit By Panda?
5 Reasons Not To Use DIY Marketing
What's Next In Web Design This Year
Paid Ads Perform Better When Combined With Social Ads
Could Bing Ads Be Better For Small Businesses?
How Can Smaller Businesses Compete With The Big Names Online?
0 replies