Since Google unveiled the Disavow Tool in October of 2012, webmasters and SEOs have treated it almost like a magic cure-all for bad linking decisions, black hat SEO, and any sort of penalty they receive from Google.

Despite the obsession with the Disavow Tool, every online poll of the effectiveness of the tool suggests it isn’t as smooth of a solution as some make it out to be. For example, a poll from Search Engine Roundtable claims that only 13% of webmasters had success using the Disavow Tool. 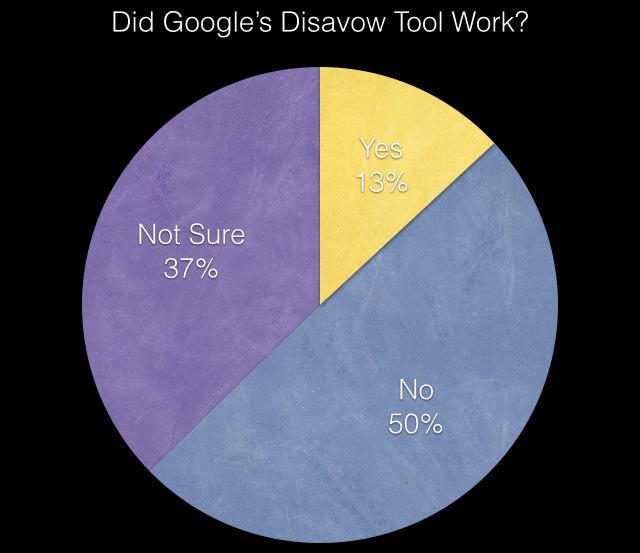 Of course, Search Engine Roundtable openly admits their polls are far from scientific (you can read their disclaimer here). But, while many are taking these results as proof that the Disavow Tool doesn’t work, it could very well indicate something very different. People seem to just be using the tool wrong a huge amount of the time.

As Barry Schwartz points out, there is no doubt that the Disavow Tool can help remove penalties, but it doesn’t always lead to better rankings. With Google’s constantly changing algorithms, it is impossible to expect to return to the exact positions in the results you were already at.

Not only that, but Google has given very specific instructions for how the Disavow Tool is intended to be used, and experts have been regularly updating their own guides for the tool. But, a lot of webmasters see that they received a penalty of some form and immediately go into panic mode. They mass disavow links, without doing the work to ensure the links were ever the problem.

What do you think? Is the Disavow Tool not reliable, or is the tool being misused?

Is Google Going To Revolutionize Search With Image Reading?

How Can Smaller Businesses Compete With The Big Names Online?

Your Blog On Steroids: Tips For Proper Optimization

Are Your URLs Keeping Google From Indexing Your Pages?

SEO Tips Can Be Lies

Is Google Going to Favor Secure Sites in Search Results? Tearing Down SEO Myths With Matt Cutts
Scroll to top