As you have likely noticed by now, Google merged Google Plus and Google Places. This has changed the way that Places listings are showing up in a few ways. One of the changes that is most noticeable is the review system – it used to be an easy to see 5-star system. What happened?

Well, what’s happened is Google made a major move to bet everything on people’s dependency on Google Places. Now to have a business profile for Google Places, you now need to use Google Plus. This is expected to jump start Google Plus quite a bit, albeit a bit by force.

Previously this was set up with a 5 star review system. An average of the reviews was displayed if 5 or more reviews were done in a nice bright yellow star graphic. Anything less than 5 would just show “X reviews” by the Places listing, but no show of actual ranking.

Now Google has changed this to use a system by a company called Zagat. Zagat originally was used for restaurant reviews. Google decided to acquire this company back on September 8, 2011 (yes, that long ago) to use for Google Places (called Google Maps at the time). It’s taken a bit of time, but now that system is live and being used for all reviews on Google Places, not just restaurants. The review system uses a total of 30 points. It requires a minimum of 10 reviews to display a score (not just 5, needs 10 now), each review using a scale from 0 to 3: 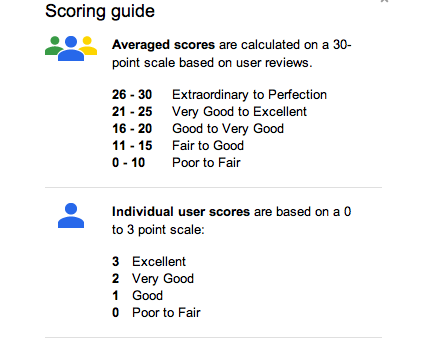 The scores are all added together, averaged, then multiplied by 10 to get the final score. This is where this score comes from and how to understand what it means. Clicking on the review total will take you to the Google Plus business listing now and you can see details for each review there.

You can see more details from Google directly on their explanation of this system of Google+ Local scores here.

Google My Business is Getting Relaunched as "Google Business Profiles"