Google announced this week it is bringing ad extensions – similar to those that appear in search ads – to YouTube ads.

The new extensions expand the capabilities of traditional ads by offering unique call-to-actions or additional information for users.

Specifically, the new YouTube ad extensions allow advertisers to include directions to brick-and-mortar store locations, show lead generation forms, or use a number of CTAs that better fit your niche.

Currently, the extensions are only available for TrueView in-stream or non-skippable video ads, though the company says it will be expanding the feature to 6-second bumper ads later this year.

Google is already exploring ways to bring more ad extensions for YouTube’s TrueView ads, and will continue to do so in the future.

For example, the company is already beta testing sitelink ad extensions which would add a series of relevant links underneath a video ad.

In the announcement, Google says the new features are aimed at driving more clicks and conversions. In a beta test with 30 advertisers, extensions like sitelinks increased conversions by more than 20% and doubled the number of clicks.

YouTube Starts Showing Ads On All Channels - Including Non-Monetized Videos 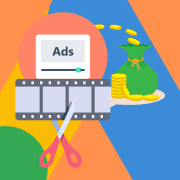