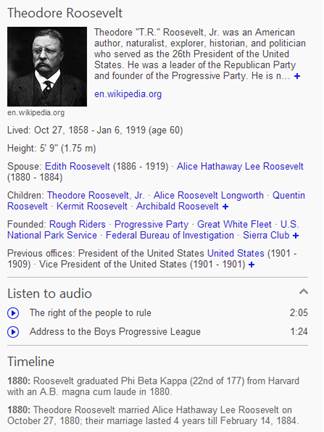 Bing is quickly expanding their new timeline feature for celebrities and historical figures. Just a few weeks after premiering the feature for athletes participating in the Sochi Olympics, Bing has added the feature to searches for about half a million famous people.

If you haven’t seen the timeline feature, it is similar to Google’s Knowledge Graph, as both highlight important information on figures in a concise column. For example, the column includes standard information such as height, spouse, children, and parents. But, with the timeline feature, Bing also includes a chronological list of important events or dates in the life of the figure you searched for.

The timeline includes footnotes for all the major events, as well as listing the year they occurred. But, don’t expect to get those results for every celebrity. Bing says that in some cases where “you would be more interested in another type of information” about the celebrity, the timeline information won’t be shown in favor of more relevant data.

Search Engine Watch points out that this is most true for actors and singers. When you search for Prince, you won’t be shown a timeline. Instead, you will be shown information about his most popular sings, albums, and even romantic interests. 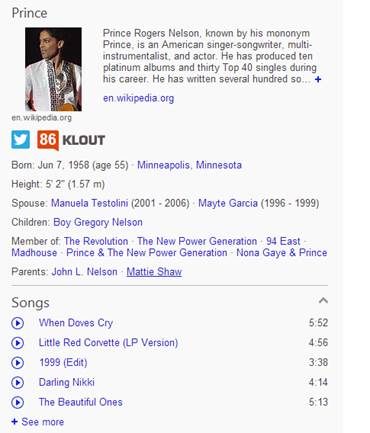 If you use Bing and haven’t run into one of these timelines yet, just keep searching for celebrities or historically important people. Bing has made it clear the half a million celebrities with timeline featured are just the start of an even more robust search result system.

The biggest question this raises is whether the timeline will always be exclusive to celebrities, or whether Bing’s relationship with Klout may indicate an intention to expand their Klout-verified snapshots with features similar to timeline. Would you want searchers to be able to automatically see a timeline for you in a search engine?

Dispelling the 5 Lies About Building an Audience

How To Diagnose a Sudden Drop in Search Traffic

90% Of Google Notifications Are Not About Links