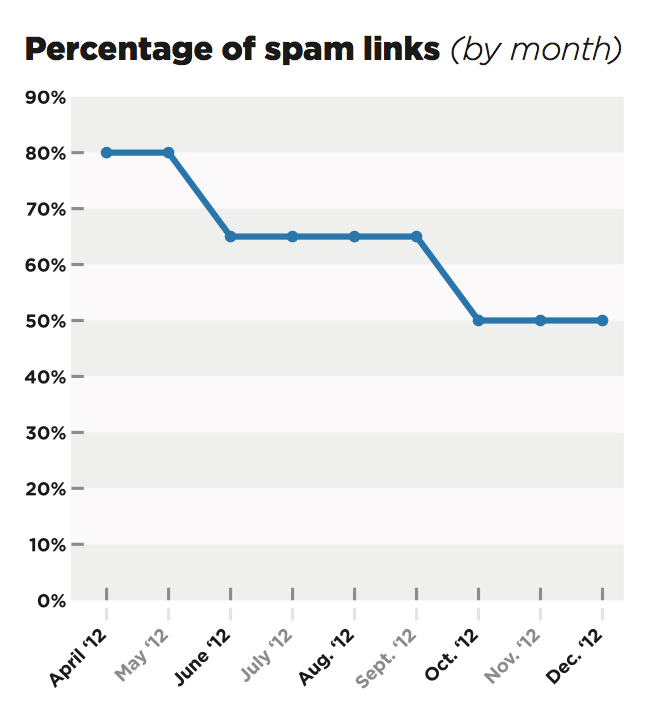 While everyone in SEO collectively yells every time a Google Panda update rolls around, announced or unannounced, Google’s spam fighting algorithm Penguin may be of more concern for many website owners.

Though Google’s estimates say less than four percent of websites have been affected by Penguin, a new study by Portent suggests that Penguin will eventually be a concern for SEOs everywhere, if it continues to follow its trend.

Since the reveal of Penguin, Google appears to have become less tolerant of spammy links. The study looked at 500,000 links which show that Google has been steadily reducing its webspam tolerance, and increasing the likelihood of site penalties over time.

This isn’t an issue for most legitimate site owners, as it takes roughly 50-percent spammy backlinks in your profile to trigger a Penguin site penalty, but when Penguin came out, a site needed to have 80-percent of it’s backlinks classified as spam to attract the attention of Google.

Still, a site with 50-percent spammy links isn’t watching their profile all that carefully, and is probably engaging in some pretty questionable strategies. The concern is where Google will draw the line. Will they keep tightening their grip until only 5-percent of backlinks are allowed to be “spammy”? We won’t have any idea until another Penguin update appears.

Opera Users Have the Highest CTR Rates According to Data

Google Beefs Up Its Defense Against Clickjacking
0 replies