Marketing has become a holistic practice. You can’t just focus on one channel and expect to have the impact that those who are using every method to connect with the public are getting. For online marketing this means you can’t rely on just SEO or PPC to get the visibility you want. A new study from the digital marketing tech company Kenshoo proves this point by showing that marketers using social advertising and paid ads together see better conversion rates than those who only use a single channel.

“The fact that Facebook advertising on its own during this study was declared a successful initiative and had such a strong impact on paid search is indicative of the power of the platform,” Kenshoo said in its report. 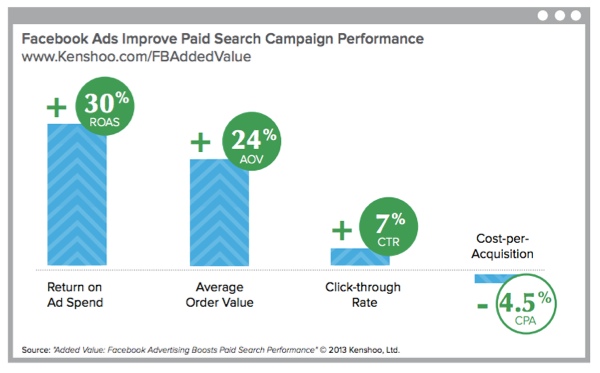 “If marketers only had one Key Performance Indicator (KPI) to compare media channels, the metric of choice would be ROAS [return on ad spend], which is calculated as Revenue/Cost. For example, if an advertiser spent $20 and generated $100 in sales it had a 5x ROAS. Even media with different conversion goals can be easily evaluated based on how much it returned versus how much it spent.”

Kenshoo also noted that click-through rate improved along with returns on ad spending. Paid ads saw a 7 percent increase in CTRs when a person had seen both Facebook and PPC ads, “indicating that social advertising was able to positively impact consumer awareness and perception of the brand.”

When combined, search and social advertising also resulted in 4.5 percent lower cost per acquisition, according to Kenshoo.

“On the surface, 4.5 percent may not seem significant when compared to some of the other high numbers reported in this study,” Kenshoo said, “yet ask any advertiser if they could lower their costs to bring in orders by this amount and they would all jump at the opportunity.”

Why Responsive Design Is Winning The Mobile SEO Debate

How To Use Social Media To Create Conversions [Infographic]

What Is a Nofollow Tag and How To Use It [Infographic]

Tools To Speed Up The Web Form Creation Process

Why You Should Keep Your Preferences Out Of Logo Design

Untargeted, Disappearing Ads Will Be Coming To Snapchat "Soon"
0 replies

Problems With Search Engines Crawling or Indexing Your Site? Google Says “No... What Does Facebook’s New Meme Policy Mean For Marketers?
Scroll to top