Facebook just added one feature users have been begging for forever. For the longest time, users have been confined to sharing their emotions and experiences through boring old pictures, but finally they are free to express themselves in the true language of the internet. That’s right, Facebook now supports GIFs in the Newsfeed.

“We’re rolling out support for animated GIFs in News Feed. This is so you can share more fun, expressive things with your friends on Facebook.”

Until now, Facebook users had to resort to third-party services like Giphy to embed GIFs, but Facebook finally made the step to add GIF support for images from all sites. Sharing a GIF in your Newsfeed is as easy as copy and pasting the URL in your status bar, as you would do with any other link. However, for the moment Facebook still does not allow users to upload GIFs directly.

Here’s an example of how the GIFs will look in your feed: 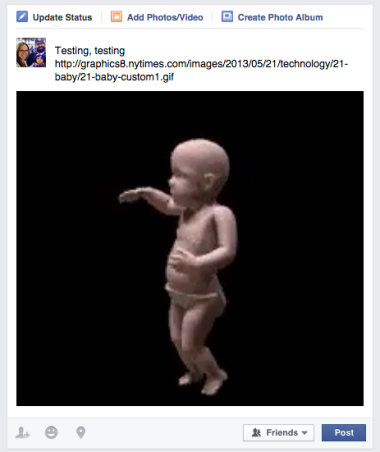 The GIFs currently autoplay, similar to how videos function in the Newsfeed.

For the moment, GIF support is limited to strictly people on Facebook, not business pages, but it seems likely that Facebook will be expanding support for the popular animated image format in the near future.