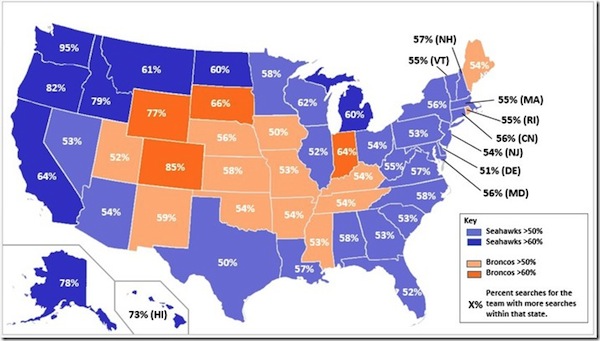 No one is calling a clear winner for the Big Game Sunday Night. As numerous sports analysts have pointed out, it is rare that both of the best teams from the past season actually make it to the Super Bowl, but this year the Seattle Seahawks and Denver Broncos match-up should make for a truly exciting game.

While the game will likely be close, Bing says the Seahawks have already been dominating the Broncos online. Bing examined U.S. search volume for both NFL teams, and the Seattle team has taken the lead in 33 states.

Of the 17 states where the Broncos held the most search volume, they had a less significant lead. Their home state of Colorado had the most significant difference with 85 percent of searches, while neighboring Wyoming had (77 percent). South Dakota and Indiana brought up the lead with 66 and 64 percent respectively.

In total, Bing users searched for the Seahawks 26 percent more often than the Broncos.
Of course, outside factors could explain the differences in search volume.

As Search Engine Watch points out, searches for the Seahawks spiked across the nation immediately following Seahawks cornerback Richard Sherman’s infamous post-game interview. The controversy and excitement surrounding the over-the-top interview made the Seahawks’ search volume jump over 80 percent.

The Broncos have had their own moment of viral fame, with tons of clips compiling Peyton Manning yelling “Omaha”, but the larger focus after the Championship games two weeks ago was easily favoring Sherman. Without his spectacular outburst, search volume would likely have been more even across the country.

What are you thoughts? Who are you favoring in Super Bowl 48?

What To Do After Your Manual Penalty Is Removed
Have We Hit Peak Facebook?
Google Maps Lets You Explore The Tardis and Warns You About Walking Into Mordor
Matt Cutts Warns Against Taking Google Patents Too Seriously
How To Please Customers and Search Engines With The Same Website
The Best Practices For Responsive Design [Infographic]
New Survey Shows The Majority of Small & Medium Businesses Find Online Marketing Effective
SEO Basics: What's the Difference Between On-Page and Off-Page SEO?
0 replies