It appears we are currently in redesign season for most major search engines and social media platforms. Over the past month, Google and Bing have announced redesigns of their search results pages (Bing’s is still in testing, but has been confirmed). Meanwhile, Facebook rolled out the latest version of their site, and now Twitter has announced a new design for profile pages, complete with a slew of new features.

It seems obvious that one of the major motivators for the redesign was to improve organization of the site. Marketing Land recently conducted a study that found one of the biggest reasons for people to quit Twitter was the lack of sorting, filtering and media, which are all major focuses of the new layout. 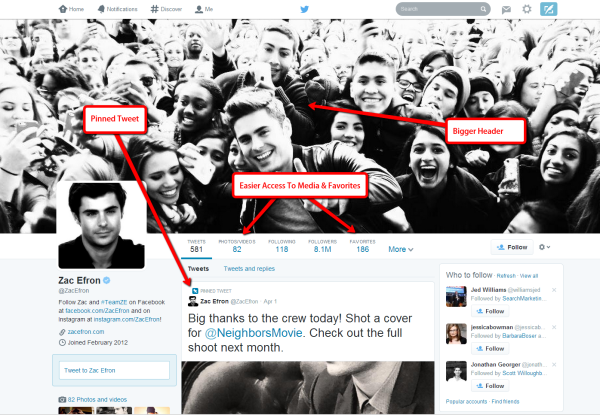 The biggest and most notable change however, is the huge profile header that spans the full width of the screen. The huge header is easily the biggest visual change, but the most important updates all fall below. The new features allow users to pin Tweets to the top of the page, which is the first feature that allows users to break the chronological flow of their page ever. You can also filter the tweets you view by three categories:

One of the last updates is a bit more subtle than the rest. Tweets with more engagement have gained more prominence on the screen as fonts get bigger based on activity. The Tweets getting the most attention get bigger, while less popular updates will continue to be shown at the normal font size. 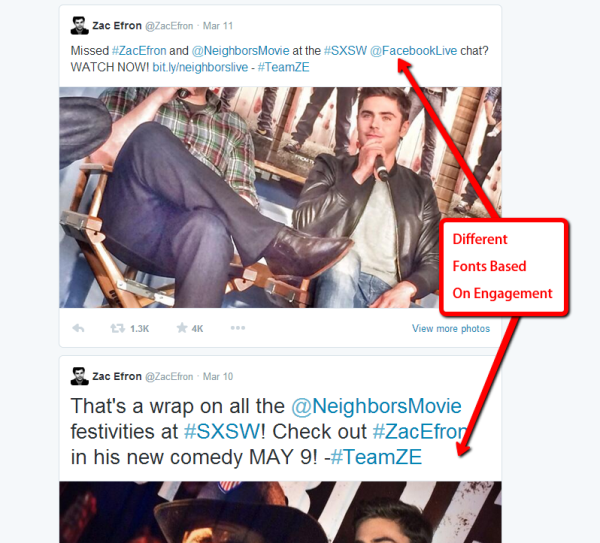 The new profile design and functionality is currently limited to a small group of prominent users such as Weezer, Zac Efron, & Michelle Obama, but Twitter promises all users will have access in the “coming weeks.”