Two years ago, Search Engine Land released their “Periodic Table of SEO Ranking Factors”, but we all know that SEO doesn’t stay the same for that long, especially with the bigger changes that Google has been pushing out lately. That is why the periodic table was recently updated, clarified, and re-branded “The Periodic Table of SEO Success Factors”.

When you hear that Google has over 200 “signals or ranking factors” and over 10,000 “sub-signals” it is easy to get overwhelmed or confused as to where you should focus your efforts. However, those big numbers are usually created by speculation such as whether or not Google pays any attention to Facebook Likes (the truth is, we don’t know).

While there may be a full 200 signals Google uses, there is a hierarchy to how important each signal is, and we have a pretty good idea of the most important ranking factors that Google relies on. These bigger signals are also the most likely to stay stable over time. If we somehow were to find out the current full list of ranking factors, the system would change again by the time you had their weight and function mapped out. Heck, they may have changed while I typed this sentence.

Search Engine Land’s periodic table doesn’t attempt to focus on the small things, but instead shows you the areas that have the biggest impact on rankings and visibility. As the creators see it, the table is a starting point for new SEO and a friendly reminder for the veterans. The simple version of the periodic table is below, but you can find the expanded table as well as the key for understanding the image here. 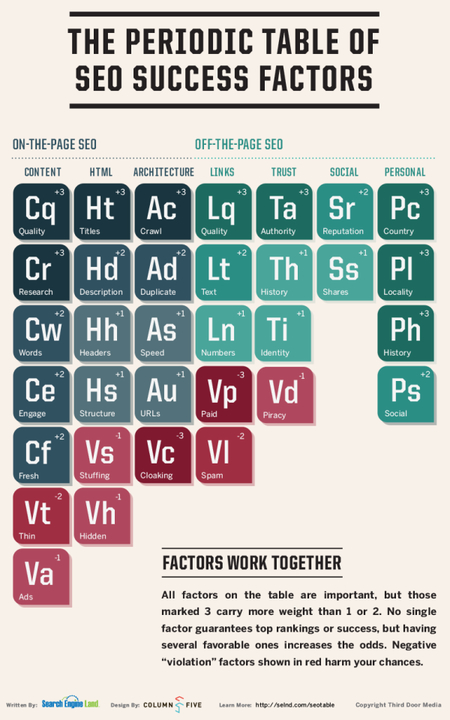