Last week, Apple announced their new iPads, the iPad Air, a thinner, lighter, and more powerful version of their full-size tablet, as well as an updated iPad mini with Retina Display. The broad public response to Apple’s latest products seems to be underwhelming, but it hasn’t seemed to sway how popular Apple products are with consumers. 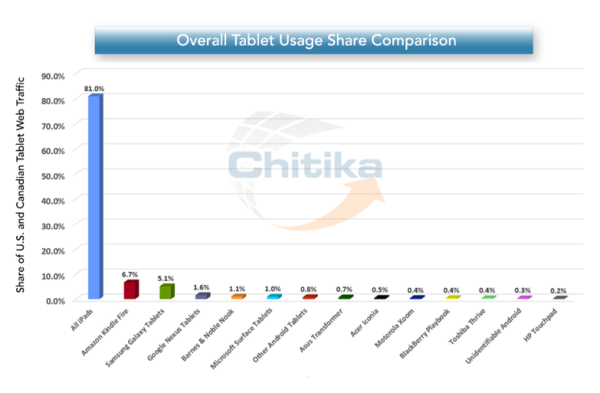 The day of Apple’s big announcement, ad network Chitika released their analysis of tablet traffic from North America, and it appears the negative market analysis has done little to diminish Apple’s grip on mobile traffic. The iPhone owned mobile traffic through the entire rise of smartphones, and now it seems the iPad has just as strong of a stranglehold on tablet traffic, raking in 81 percent of the market.

According to Marketing Land, this is actually a decrease from their 84 percent traffic share in June, but Chitika says no other single competitor has directly benefited. Their traffic may be down, but not a remarkable level by any means.

Recent data from the Pew Research Center says that 35 percent of Americans over the age of 16 own a tablet, and clearly the iPad is the most popular option for browsing the internet. However, the Kindle has proven to be the most successful Android tablet in North America, so it may be that consumers are simply choosing the tablet most suited for their needs: e-books or the internet.

There are so many articles out there fawning over the design of Apple’s products. Starting with the third or fourth version of the iPod, every new product has gotten nothing but love for their revolutionary design, all the way up to the iPad. Every part of the iPad’s design, including the interface, have been broken down and critiqued.

There is one aspect of the iPad that Apple can’t control, however. Apple designs a few apps, but the vast majority are made by other companies. Sure, a good amount of them are cheaply designed, but there are also high quality apps made by designers that care, and it is in those apps that you can learn some of the best rules for modern design. Carrie Cousins collected ten things she learned from iPad apps at Design Shack, and they can be transferred over to any other medium today.

It all begins with an emphasis on simplicity, and Cousins pinpoints one of the most undeniable reasons why web design has taken a turn towards minimalism. Too much on a small screen can overwhelm the user, and simple, easy to use designs help the on-the-go user access what they want, when they want it.

Almost every major trend in web design is also observable through iPad apps. Simple color schemes, and flat designs are all the rage right now, reflecting the continued push towards simplicity on these small screens and it is hard to deny how effective the design changes are. Apple has never been a proponent of flat design, but recent redesigns by CNN and Facebook show that flat design looks great on tablet screens. 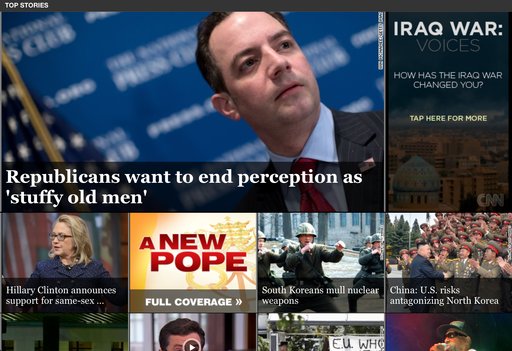 The unforgiving Retina Display of the iPad will also teach any lazy web designer a good lesson very quickly. You can’t cut corners on any visual aspect of an app. One low quality icon will stick out like a sore thumb on an otherwise crisp and clear interface, and one small shoddy image will destroy the value of your content just like a crack in the foundation of a house will one day destroy that home.

There are plenty more lessons to learn from iPad apps. Cousins has a few more in her article, but if you are critical of iPad apps as you use them, you’ll learn even more. The best part is, because apps are constantly updating their designs, and new innovative apps are coming out every day, you will be able to keep up to date with design so long as you keep killing time on your tablet.

The tablet market looks like it is getting crowded from a distance, but the data from a new study from mobile publishing platform Onswipe suggests there really is no contest as to what tablet is driving meaningful amounts of web traffic.

According to Onswipe’s study, the iPad is the source of a whopping 98 percent of all tablet based traffic. Now, before the Android lovers begin sharpening their pitchforks, this data is supported by other recent studies as well.

The data also shows that iPad owners spend more time online per session compared to their iPhones, and are more active. Also interesting is the iPad creates more traffic than iPhone and Android devices combined, despite there being hugely more iPhones and Androids out in consumers’ hands.

Slowly, we are beginning to see a trend in mobile browsing, and what is resulting is a very complex picture, despite these seemingly clear-cut findings. Onswipe also found that Kindle Fire users spend more time with their devices than iPad users, however they do not spend as much time online for obvious reasons.

Marketing Land has some graphs to help you visualize the Onswipe’s findings.

The iPad is the latest Apple news and it’s been getting a lot of attention.  Considering this, some not-so-nice SEOs are using the fresh keywords to do black hat SEO to infect computers across the globe with malware.  They’re targeting laterally related keywords such as “Apple Tablet” and “Apple iPad Rumor”.

Be cautious if you see some weird results when you do searches on these types of terms.  The eWeek Security Watch has more info on this.

This isn’t directly internet marketing related, but it’s something I know a lot of people have been waiting for.  The iPad (AKA the iTablet and other names).  It looks to be a cross between the iPod/iPhone, a laptop, and a television.  It’s thin, sits in your lap, and is full touch-sensitive.  Plus compatible with your old systems, so you can copy apps from the iPhone to the iPad to have them full-screen.

It looks like it might have good potential for a portable movie player with a substantially larger screen, has better use for eBooks, and the higher resolution makes everything a little easier to see, such as maps, your calendar, YouTube, not to mention web browsing.

The full announcement came today from Apple, so if you’re curious to learn more about it (as I still am), you can check out the official iPad page.