After gradually applying its “mobile-first” algorithm to qualified sites over the past few years, Google is signaling it will be expanding the indexing system too all sites within a year – whether they are ready or not.

As reported by Twitter user @KyleW_Sutton and Search Engine Land’s Barry Schwartz, Google has begun sending out Search Console notices to sites who have yet to be included in the mobile-first index describing why their site is not ready. 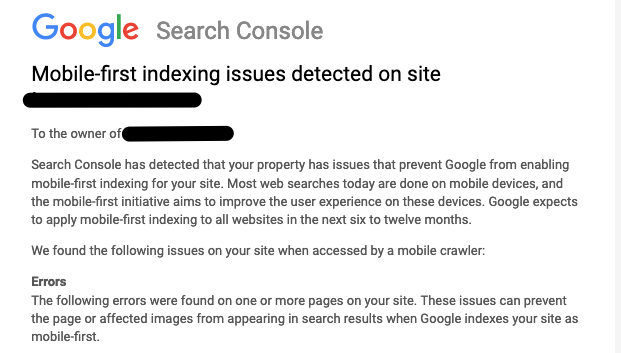 Within the alerts, the company says “Google expects to apply mobile-first indexing to all websites in the next six to twelve months.”

What Is Mobile-First Indexing

Recognizing that more searches were beginning to come from mobile devices rather than desktop computers, in 2016 Google announced it was launching a new ranking system which prioritized sites that had taken steps to be “mobile-friendly.”

For example, sites with responsive mobile designs, fast loading speeds, and had removed Flash would be prioritized over those which had issues rendering on mobile devices in search results.

Initially, this took the form of an entirely separate indexing system for search results exclusively on mobile devices. However, the company has been working to create parity by making mobile-first indexing the primary method of crawling all sites.

The announcement that mobile-first indexing will be applied to all sites within a year marks the opening of the final chapter in the years-long effort to ensure all search results will load well whether you are at an office computer, using a phone on-the-go, or lounging with a tablet.

If you have received this email or alert, it is a major warning sign that your site isn’t ready for a huge number of modern devices. Depending on what issue is present, it could mean something as small as an issue with a specific image presenting errors or as bad as your site being entirely unable to render on smartphones.

Either way, there is a large chance the issues present on your site are already affecting your rankings by preventing mobile-searchers from finding your site in search results. This will only get worse as Google moves forward with applying mobile-first indexing to all sites unless steps are taken to resolve the issues Google has observed.