Have you ever wonder exactly how Google works? How it sorts through the billions upon billions of web pages to find the best results for users?

The latest video in the company’s “Search for Beginners” series helps explain the basics behind how the search engine functions, including crawling, indexing, and ranking sites in its search results – specifically from the perspective of a business owner trying to get their site ranking well.

While the video doesn’t get into more advanced concepts like Search Engine Optimization, it lays out a very clear picture of how the broad strokes of online search engines work.

If you’ve just set up your first website or you’re considering investing in online marketing, this clip will be enlightening and point you towards some valuable resources like the Google Webmaster guidelines, SEO starter guide, and Google Webmasters portal.

Has your brand or business been using large pop-ups to gather email addresses or asking people to like you on Facebook? You might be in trouble with Google if you don’t change your site soon.

Google has announced it will begin to penalize sites with intrusive pop-ups or interstitials starting January 10, 2017.

As Google defines them, intrusive interstitials are pop-ups that block the main content on a screen until an action is taken. While this can be an effective way to ask visitors to take action, most people find these annoying because it serves as a roadblock before they are able to see what they came to see.

“Pages that show intrusive interstitials provide a poorer experience to users than other pages where content is immediately accessible. This can be problematic on mobile devices where screens are often smaller.”

For the moment, Google is just singling out interstitials on mobile devices and devaluing search rankings for mobile results. It is unclear if they intend to extend this to desktop in the future. 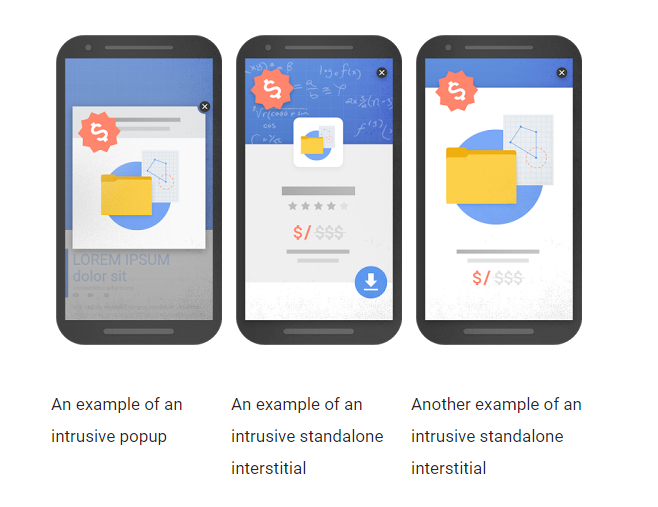 The change to Google’s algorithms specifically targets pages with interstitials that either pop-up immediately when a person lands on a page or is triggered by scrolling down the page. It was also devalue sites which use oversized above-the-fold content to look like an interstitial.

There are some exemptions to Google’s interstitial rules. Pages with “reasonable” banners that don’t take up excessive amounts of screen space will be considered acceptable. Also, sites that are required to use interstitials for legal reasons – such as cookie usage or age verification – will be exempt from ranking devaluation.

The latest change shouldn’t come as a complete surprise. Google has already cracked down on one form of interstitials in the past by devaluing pages with interstitials that prompt users to install a mobile app. According to the company’s announcement, their work into that algorithm change showed the company they also needed to tackle interstitials as a whole.

As with all algorithm changes, the new guidelines for interstitials don’t automatically mean death for your online traffic if you are using interstitials. If your site is still highly relevant for a search, it may still appear in the top results. However, it is usually better to err on the side of caution with Google, rather than face the risk of a penalty.